PATHUM THANI - A married couple were injured jumping to safety from the fourth floor when fire raged through a block of shops selling car parts and engine oil in Muang district early Friday morning.

The fire broke out about 4.30am in the four-storey commercial building on Rangsit-Pathum Thani Road in tambon Ban Klang and spread rapidly through the row of shops, a duty officer at Suan Prik Thai police station said.

Twenty fire trucks and crews from tambon Ban Klang and nearby areas were rushed to the scene.

Pratheep Udomrattanawit, owner of Udomsap auto parts, and his wife were injured when they jumped from the fourth floor of their shop to escape the flames.

Radda Pumyat, 64, of Sam Khok auto parts, said all four floors were occupied with stored auto parts and engine oil as the shop also served as a warehouse to deliver goods to its outlets.  She estimated the damage to her son’s shop was 60-70 million baht.

Roads in the area were closed during the fire, but had since reopened to traffic, he said. 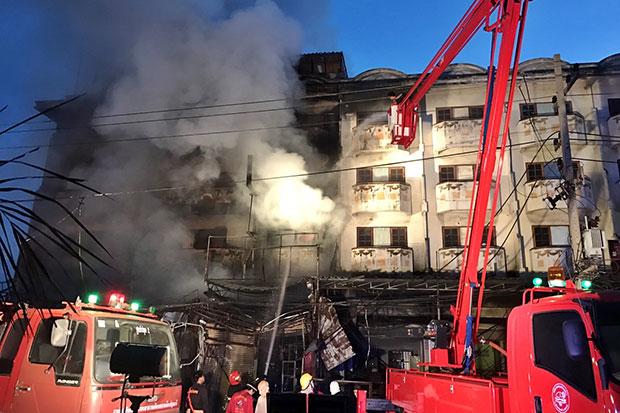 Black smoke pours from an car parts shop before spreading to adjacent stores in the row building on Friday morning. (Photo by Pongpat Wongyala)

A pilot was seriously injured after an F-5 fighter jet crashed during an air operation training in Chai Badan district of Lop Buri province around noon on Friday.