Before and after photos of Pvt Yutthakinun "Benz" Boonniam show him in training as a military policeman (left) and hours before his death after a savage beating. (FB/Bomlunglang)

The army has ordered a probe into the death of a 22-year-old private in the southern province of Surat Thani as his family suspects he was brutally beaten in a local army prison.

Meanwhile, two military officers have been transferred to inactive posts following a petition filed by the mother of the private who died after he was allegedly attacked in Vibhavadi Rangsit military camp in Surat Thani.

Pvt Yutthakinun Boonniam, known as Benz, who had served at the camp, was attacked during detention in a military prison for disciplinary offences, media reports said.

He was taken to a local hospital following the attack on March 31 and was pronounced dead by a doctor on Saturday morning, one day after being admitted to hospital for treatment. 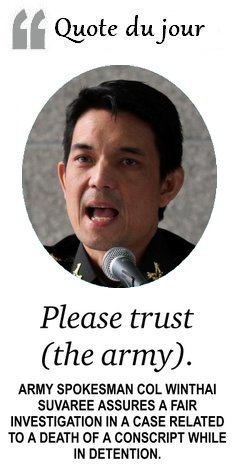 Col Winthai was referring to a report that Pvt Yutthakinant Boonniam succumbed to his injuries at a local hospital after being detained in the prison at Vibhavadi Rangsit Camp.

"Please have confidence. If it is concluded that any officer did this, he will face legal and disciplinary actions to the full extent," the spokesman said.

In the meantime, an army unit is taking care of the family of the victim to ensure all parties are fairly treated, the spokesman said.

The transfer order was signed by Maj Gen Wichai pending an investigation by police and military officers.

Maj Gen Wichai said he has ordered a probe into the death of Pvt Yutthakinun and formed a committee to look into the case.

Maj Gen Wichai said he urged military officers who may be ordered by police officers to give an account to cooperate fully.

He insisted he will not protect any military officers, saying people who make a mistake should be punished.

An investigation will be conducted in a fair and transparent manner, he added. 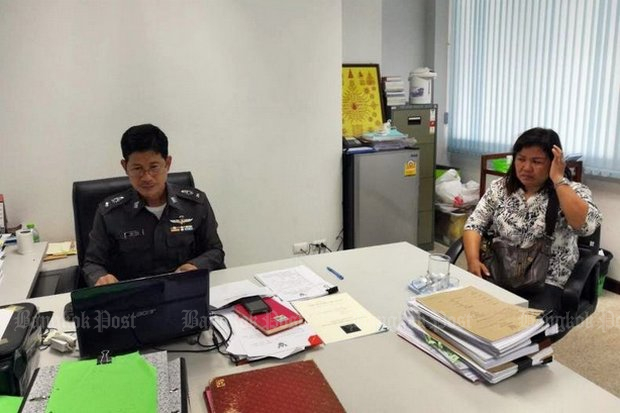 Renu Modrakhee, mother of Pvt Yutthakinun files a complaint with the Surat Thani police. The army said it is 'looking after' the woman and her family. (Photo by Supapong Chaolan)

A message was also posted online.

The message read: "My cousin, who is a military officer, was detained in a military prison and was attacked by his colleagues, injuring internal organs.

"Doctor gave him cardiopulmonary resuscitation four times but could not save him."

The user also urged internet users to share the pictures and the message as way of seeking justice for the officer.

Renu Modrakhee, the mother of Pvt Yutthakinun, said she found her son with black and blue welts on his body and swollen eyes when she met him at the hospital where he had received treatment following the attack.

The mother claims she was told by a military officer that Pvt Yutthakinun was attacked by people outside the military camp.

Earlier, Ms Renu met Maj Gen Wichai, asking him to set up a committee to oversee the investigation into the death of her son.

On Friday, the mother lodged a complaint with Muang Surat Thani police against the death of her son.

She also asked for help from Pol Col Sirichai Songwasin, superintendent of Muang Surat Thani police station, to inspect the military camp and prison where the incident took place.