A fan of TV soaps, the 4th army boss shows soft side as he woos insurgents back to normal life

It is hard to imagine how a fan of soap operas who often chills out in front of the television at night can wake up the next morning to help lead soldiers in the fight against the southern insurgency.

But in the view of 4th Army commander Lt Gen Piyawat Nakwanich, such dual characters are not strange. He knows popular TV series almost as well as he does security policies and military strategy. 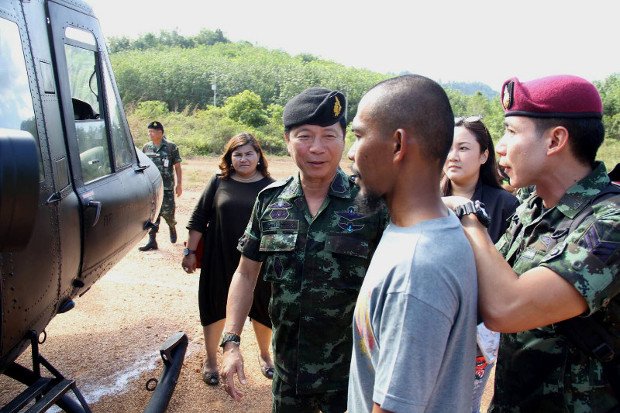 Since his appointment to the top military post in the South in October last year, Lt Gen Piyawat has used both military and non-military approaches to the problem, which reflects to some extent his routines in which he takes on the solemn duty of military affairs by day but becomes softer at night.

"We can't just keep suppressing [insurgents]," he said. "More lenient and softer measures must be carried out at the same time," he added, referring to an initiative of the counter-insurgency campaign which encourages insurgents in the far South to lay down their arms.

The "Bring People Home" programme aims to persuade militants to surrender and join the state's efforts to restore unity in Pattani, Yala, Narathiwat and parts of Songkhla, which have been torn by the insurgent movement since 2004.

"We need those who are at the forefront of the militia, those who repent their acts," he said. Lt Gen Piyawat once announced his mobile phone number for direct contact with guerrilla suspects who want to turn themselves in.

"I'll receive the phone calls myself," he said. "I'll bring you in no matter where you live -- on a mountain or in a forest," he added, believing this sincere act should help him gain trust from militant suspects.

At least five suspects have phoned him directly while others are still undecided as they want to see what will happen to those who surrender first, Lt Gen Piyawat said.

So far more than 1,000 insurgent suspects have joined the programme.

Asked whether he is worried he may be fooled by some callers and end up a target for their attacks, Lt Gen Piyawat said he has to check out areas they agree to meet at and tells soldiers to patrol the spot first to ensure his safety.

But as for the suspects who have turned themselves in to the authorities, "they trust me," the 4th army chief said.

"They believe I can give them fair treatment." Suspects are still required to go through the legal process, including facing court if they are charged, he said.

The suspects who turn themselves in to the government are taken to the Ingkayuttha Borihan army camp in Pattani where they are questioned about their experiences while they were members of militant groups.

This, Lt Gen Piyawat said, is a type of intelligence mission -- a job he is familiar with. Since graduating from Chulachomklao Royal Military Academy, he has worked in the army's intelligence unit and also gained solid experience in southern Thailand, his main work base.

The 4th army chief is popular with his associates because he is good-humored, easy-going and friendly.

His good temper has given rise to a new nickname for him: "Art Resort".

"Art" is Lt Gen Piyawat's regular nickname while the "resort" refers to the Ingkayuttha Borihan army camp, where suspects who join the programme spend time while they re-adjust.

They are not detained but live in resort-like conditions in the care of soldiers for up to six months, during which officers offer them career training.

The Internal Security Operations Command (Isoc) Region 4 Forward Command is preparing to ask for a new budget to support the careers of people who turn their backs on the insurgency.

Other factors are at play in encouraging militants to come forward. First, they get bored with hiding, mostly in Malaysia. Their families also play a key role in persuading them to surrender, Lt Gen Piyawat said.

Another factor was the death of Sapae-ing Basor, former leader of Barisan Revolusi Nasional (BRN), a key militant group in Mara Patani, an umbrella organisation of insurgent groups, which has been involved in peace talks with the Thai government.

The BRN has appointed Abdullah Wan Mat Noor as its new chairman.

"No matter who will rise to power, we will continue doing our jobs," Lt Gen Piyawat said. "If they provoke [violent] incidents, we have to deal with them under our laws."