The police checkpoint at Krong Pinang market of Yala province was a shambles after the early morning attack, where the RKK separatists used Molotov cocktails and pipe bombs. (Photos by Maluding Deeto)

The Runda Kumpulan Kecil (RKK) insurgent group is suspected of being behind a gun and bomb attack at a security checkpoint in Krong Pinang district of Yala province in the early hours of Monday which wounded 12 police officers, according to a security source. 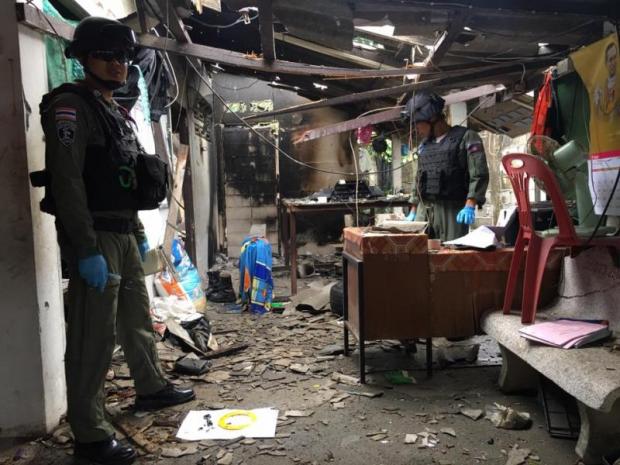 above  Security officials inspect a checkpoint at Krong Pinang market in Krong Pinang district of Yala that was attacked by gunmen at 1.15am yesterday. Molotov cocktails were also used in the attack. photos by Maluding Deeto

At least two sub-groups, one led by Arbus Je-ali and the other by Armad Leu-arbae who are leaders of more than 30 insurgents under the RKK group, are believed to be responsible for the attack carried out at 1.15am.

Three out of the 12 police officers at Krong Pinang district police station sustained minor injuries and were immediately discharged after treatment, while the other nine remained in hospital.

The checkpoint that was attacked is on the premises of Krong Pinang market.

Footage taken from nearby security cameras showed an initial group of about five to seven attackers climbed up on the roof of one house near the checkpoint, opened fire at the checkpoint using AK and M16 rifles and shotguns, and threw a number of Molotov cocktails at the checkpoint.

That prompted security officers stationed at the checkpoint to fire back at the attackers, leading to a fierce gun battle, which was also captured on the security cameras.

Footage from the security camera installed in front of the checkpoint showed a further eight armed attackers running across the road approaching the checkpoint just as more police officers from Krong Pinang station emerged. Another gun battle with this group of attackers ensued.

The shooting went on for a while until one attacker was shot, which led the other attackers to retreat carrying away their injured comrade.

It is believed at least 20 insurgents were involved in the attack on the checkpoint. 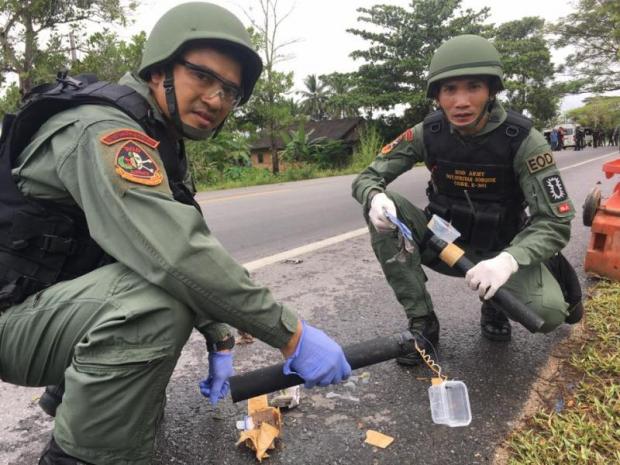 Following the attack, a bomb disposal squad from the headquarters of Yala provincial police, along with a police forensic team came in to inspect and clear the attack site.

The bomb squad and forensic team found five dud pipe bombs, three pipe bombs that had been and more than 100 spent cartridges at the scene.

In a related inspection carried out later on Yala-Krong Pinang Road, officials found a tree that had been cut down and laid across the road, some burnt tyres at one point of the same road, an electricity pole damaged by a pipe bomb blast and eight dud pipe bombs.

Spikes were found scattered on Road No.410 apparently to delay security authorities from pursuing the fleeing attackers.

The road was sealed off while the authorities worked to clear the dud bombs and collect evidence.