Explosive ordnance disposal officers on Friday morning inspect the scene of an overnight explosion that brought down a power pole in Yala, one of a string of bombings in the three southernmost provinces and part of Songkhla. (Photo by Muhammad Ayub Pathan)

A string of bomb explosions, burning of car tyres and strewing of spikes on roads rocked areas of the three southernmost provinces and part of Songkhla overnight. No casualties were reported.

Authorities acknowledged that the insurgents had targeted the power supply.

A total of 52 power poles in 19 districts of Yala, Pattani, Narathiwat and Songkhla were damaged, causing widespread blackouts.

In Pattani, provincial police chief Piyawat Chalermsri on Friday ordered all 15 police stations in the 12 districts to tighten security after insurgents caused disruption with 11 attacks throughout the province.

Explosions were heard across Pattani from midnight to the early hours of Friday. Car tyres were set on fire on several roads.

In Muang and Nong Chik districts, about eight explosions were heard in each district, followed by power blackouts  in many communities, particularly in Muang municipality areas.

Security units  reported bombs detonated on Koh Por bridge on the Pattani-Yala Road in Nong Chik district. Nobody was injured. The area was cordoned off for further inspection today.

In Narathiwat, a series of bombs went off and spikes were strewn on roads at several areas in 12 districts from midnight to 12.30am on Friday, damaging many power poles.

They reported two power poles at Lampu village in Muang district had been attacked. Two bombs, weighing 10-15kg, had been tied to the poles and detonated.

Explosions were also reported at one location in Waeng district, two in Sungai Kolok district, one in Bacho district and one in Si Sakhon district.

There were no attacks on military targets, he said. The insurgents had targeted electricity supply. 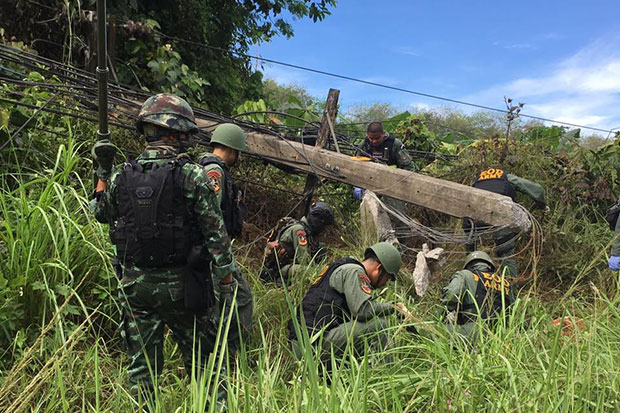 A bomb explosion toppled this power pole in Yala overnight, cutting off electricity to the nearby community. (Photo by Maluding Deeto) 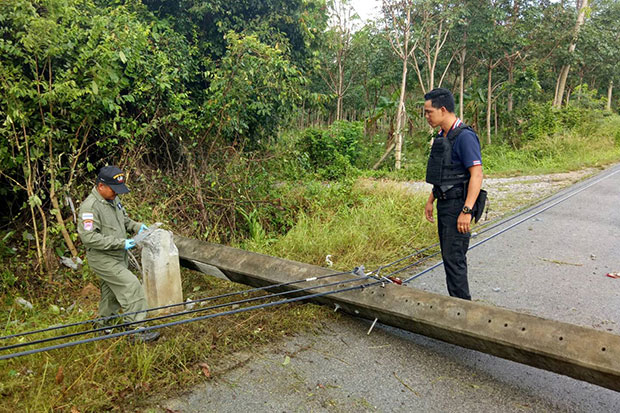 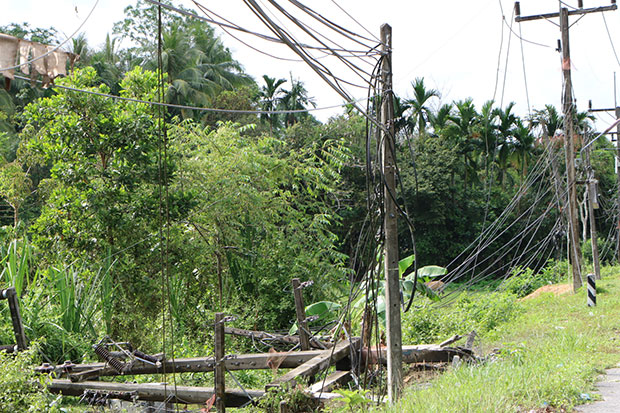