The new constitution promulgated on Thursday by His Majesty the King re-inserts a section tossed out immediately after the May 2014 coup by the general prime minister when he decreed an interim charter with the precious Section 44. The new supreme law has an actual ban on torture, beating people to death, use of meat hooks during discipline sessions. And so on.

While this is a Good Thing, it would be an Excellent Thing if it were enforced.

Last week the army hit a trifecta, and not the winning kind. After killing a young Lahu activist at a highway checkpoint and beating a trainee to death in a jail cell, soldiers marched two men off the road and into the Narathiwat woods and shot them to death. 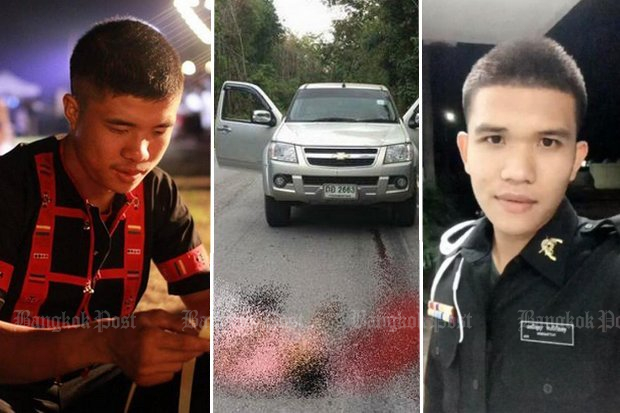 Three extra-judicial killings, from left: Chaiyapoom Pasae, killed at an army checkpoint. Isma-ae Hama, killed in the woods after being detained by the army, body dragged and dumped on the highway. Yutthakinun Boonniam, beaten to death in an army prison cell. (File photos)

Every one of these had an excuse. Chaiyapoom Pasae, the Lahu artist, was a drug dealer who tried to attack a soldier with a grenade. Pvt Yutthakinun Boonniam, a 22-year-old military police trainee known as Benz, was late for work and had to be punished. Isma-ae Hama, 28, or neighbour Aseng Useng, 30, drew a gun and had to be put down.

But each of these also has one or many credible witnesses and competing evidence. In the latter case, other soldiers physically restrained Isma-ae's 15-year-old sister while they shot her brother. Photos tell the horrifying story of Pvt Yutthakinun's agonising death. Local people saw Chaiyapoom die, and refute the official version, while police refuse to show CCTV captures from seven cameras at the scene.

The problem for people who really want to support the military regime and the use of Section 44 is that these three official accounts are so clearly and credibly countered by witnesses that very few believe the colonel and general officers relating them.

And you have the handsome celebrity army spokesman and seemingly lifetime colonel, Winthai Suvaree, brutally defending the beating death because kicking and meat-hooking a fellow soldier to death only happens once a year. Or so.

After the military confined nine low-ranking NCOs and soldiers over the beating and butchery that killed Pvt Yutthakinun, their 45th Military Circle commander, Maj Gen Wichai Thasanamonthian, said: "I have to share this responsibility too." Except that he didn't share any.

Commander Gen Chalermchai Sittisat of the Royal Thai Army told the nation that he wished his soldiers wouldn't beat other soldiers to death but, well, "there are still black spots which I am trying to fix".

Sure, blind people can see that. But it's the army, where a general can order subordinates -- i.e. every soldier in the country -- not to hit people, effective immediately, although he didn't. For hundreds of years and under Gen Chalermchai, officers are supposed to be responsible for the actions of their men, but he is not.

Only four sergeants, five privates and not a single officer of any rank are even under suspicion, let alone implicated. They have been confined to barracks while an investigation, no outsiders allowed, determines whether it is necessary to serve up scapegoats, or sweep everything under the rug with previous stockade and parade-ground killings.

Section 28 of the Constitution promulgated splendidly on Thursday (and still subject to further amendment or deletion), now states that: "Torture, any brutal act or punishment by cruel or inhumane means shall be prohibited". That's it. There is no definition of torture, no penalty for disobeying the so-called prohibition. And of course there is no organic, military or criminal law against torture. The constitution forbids it but no law, court or independent body enforces it.

Against that, Section 44 remains valid. It shouldn't, since the (now current) charter doesn't allow such powers, but chalk it up as one of the millennium's great legal manoeuvres.

So soldiers remain police, completely untrained, but with total immunity under law for anything they do while on duty, and for most things they do when off duty. That was decreed on March 30 of last year under one of the Section 44 orders. Corporal punishment remains in effect for soldiers who sleep in, and if it results in death, well, legally speaking, that's a shame, please return to your homes, nothing else to see.

That covers quite a lot of "incidents", to use the technical military term for killing people in military custody.

It's a classic case. Without accountability, the killings will continue.