The government and authorities have shrugged off remarks by the Barisan Revolusi Nasional Melayu Patani (BRN) criticising the peace talks.

He insisted the government wants Malaysia to maintain its role as the facilitator of the talks, despite the BRN questioning the impartiality of Malaysian officials.

He said whoever wants to become part of the peace dialogue will have to contact Malaysia because the Thai government cannot hold any talks with people listed as insurgents on Thai soil, he said.

Gen Prayut also turned down the group's call for international observers to attend the talks, saying there was no need to bring in anyone who may not understand Thailand's situation. 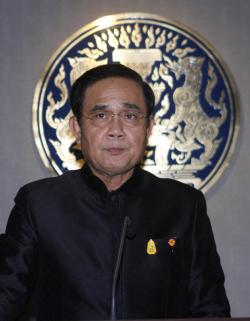 Prayut: Criticisms not that important

BRN is a key militant group in Mara Patani, an umbrella organisation of insurgent groups, which has been involved in the peace dialogue with the government, aimed at ending the prolonged violence in the far south.

In its statement, the BRN said the negotiation process should not be designed by anyone except the negotiating parties.

"It should emphasise that the BRN's stance is one of humanity and peace, and it opposes all forms of oppression and colonisation in order to defend and restore the rights of sovereignty," according to the statement.

It also said the peace dialogue must include the participation of third parties from the international community as witnesses and observers.

"The mediator in the peace dialogue should be credible and meet the characteristics of standard international practice such as being impartial and having no conflict of interest in the dialogue."

Gen Aksara Kerdphol, who leads the Thai negotiation team in the peace talks with Mara Patani, also shrugged off the call.

"We are not paying much attention to that statement. And we insist on continuing with the peace talks and believe this format is good enough," he said.

"Malaysia only serves as the facilitator of the talks, not the mediator. And there is no need to have any international observer in the talks," he added.

Some parties have tried to ruin the peace process and discredit the Mara Patani group which is representing insurgent groups, said Gen Aksara, adding that both sides in the peace dialogue are in the process of trust-building.

"Don't pay much attention to such separatist announcements. Separation is impossible. Who would ever agree with the separation idea? No one in the southern border areas does. They all support the peace dialogue," he said.

"I would like to make it clear that the BRN has not adopted any new plan designed to achieve the goal of a new independent country by 2032 as has been rumored. That simply is a plot to try and stir up further unrest," he said.