KHON KAEN - Nine statues of Naga, a new feature at a temple in Khok Phochai district, have been torched, outraging the many people who hold to a belief in the mythical serpent.

Images of the burned statues of Naga, or Phaya Nag, at Wat Tham Phupa Daeng in this northeastern province, were recently posted on the “Nagamantra’’ Facebook page  and sparked online wrath against those who set fire to them.

A woman who gave her name as Mrs Sujittra and said she was one of donors who helped build the statues, said on Friday the Phaya Naga had been set on fire on the night of April 2.

Her group was gathering information about who may be responsible for the arson. They would file a complaint with the provincial Damrongtham complaint centre, she said.

The statues had been installed on Dec 11 last year with the consent of the temple abbot, so that people who had faith in the mythical creatures could worship there. They proved a big attraction, with many people travelling from other provinces to see them.

“Worshippers came to make merit at the temple, seek blessings from the Naga statues and practice meditation here. Some volunteered to clean the temple compound. Many visitors felt this place boosted their state of mind and helped them overcome obstacles in their lives,’’ said Mrs Sujittra.

A small group of people were opposed to the construction of the Naga statues, she said. They claimed the statues affected rainfall in the community.

However, most residents favoured the idea as new tourist attraction that boosts the local economy, Mrs Sujittra said. 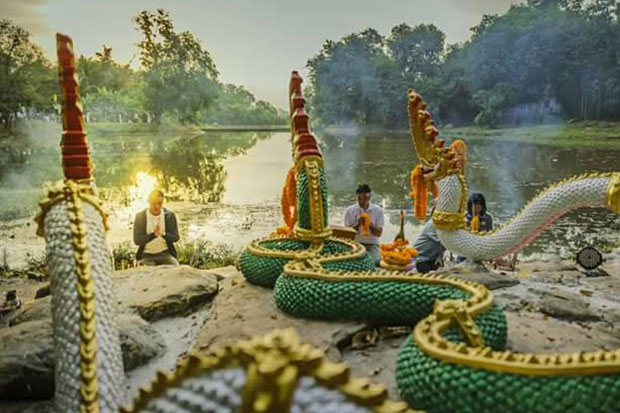 Worshippers pay respect to the Naga statues at Wat Tham Phupa Daeng before the statues were torched. (Photo taken from Nagamantra Facebook page)