The fire spreads through the building serving as the learning centre providing knowledge about the ancient capital of Ayutthaya. (Photos by Sunthorn Pongpao)

AYUTTHAYA - A fire has destroyed a traditional Thai-style structure in the Unesco World Heritage Site in this central province.

The single-storey building was in Wat Phra Sri Sanphet, part of the old royal palace in the heart of the Ayutthaya Historic Park. The temple was among the five monasteries, part of the park declared a Unesco World Heritage Site in 1991.

Built mainly from wood and glass panels, the building had been used as a learning centre providing information about the ancient capital since December 2015. It was under the supervision of the Fine Arts Department and housed models of the ancient town.

The fire started at around 9.30pm Sunday. Firefighters took about half an hour to put it out without any injury. The estimated damage is around 3 million baht.

Pol Col Surapong Thampitak, commander of Phra Nakhon Si Ayutthaya police station, initially believed the fire might have been caused by an electrical short circuit. But Ayutthaya governor Suchi Chaichumsak said officials from the Fine Arts Department told him the building had not used electricity since August last year.

The security camera footage in the area will be examined. Among the likely causes of the blaze determined by the police are possible conflicts among the agencies jointly managing the historic park and discontent following a recent forced relocation of the market behind Wat Mongkol Bophit. 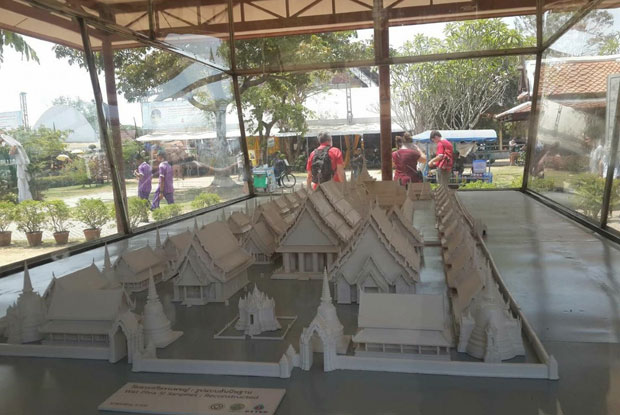 The model of the compound at the learning centre before the structure was destroyed by a fire on Sunday. (Photo supplied by Sunthorn Pongpao)