Police cleared a pro-democracy protest site next to Wat Benjamabophit in Dusit district Monday and took its leader into custody. 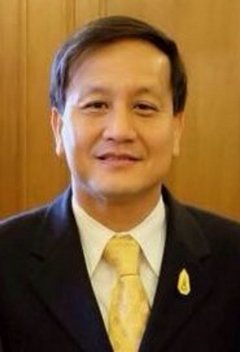 Around 50 people joined the gathering at the site Monday morning. The group was led by Sr Gp Capt Kampee Kampeerayanon, secretary-general of the Thai People Sovereignty Party.

The demonstrators called for a return to democracy and setting up a people's council to take part in the country's administration.

A team of police along with army and city law enforcement officers went to the site to quash the demonstration.

Sr Gp Capt Kampee said he was leading people who want freedom and liberty and the right to seek justice.

Following the 1932 Siamese Revolution in which Thailand changed from an absolute monarchy to a constitutional one, the country has struggled to introduce a true democracy; but now the nation is demanding it, Sr Gp Capt Kampee said.

A people's council should be created so people from all sectors of society can have a say in the country's administration, said Sr Gp Capt Kampee.

Pol Maj Gen Watcharapong Damrongsri, chief of the Metropolitan Police Bureau's (MPB) Division 1, said officers were aware the group had started setting up a stage for the gathering on Sunday night. They did not ask for a permit to stage the protest, while the gathering had occupied lanes of Nakhon Pathom Road and obstructed traffic, the officer said.

At 11am, officers used loud speakers to tell demonstrators to disperse, saying they were breaking the law which bans political gatherings of five people or more.

Following three announcements, police moved in and took away Sr Gp Capt Kampee. Officers also deployed vans to take other demonstrators home. The stage was then torn down.

Deputy chief of the MPB, Pol Maj Gen Panurat Lakboon, said the demonstration's leader will be charged with violation of the National Council for Peace and Order's order barring political assemblies of five people or more as well as the Public Assembly Act.