Junior, the 8-month-old pet "mini-pig", enjoys a meal of fried noodles from her own, special tray. (Photo taken from @Pigjuniorr Facebook page)

A young man who bought what he thought was a tiny pot-bellied piglet to raise as a pet received the surprise of his life when it just kept growing, and eight months later he now has a 150kg black and white sow sharing his home.

Junior became an instant hit with netizens after the story and photos were recently posted on the Facebook page “@Pigjuniorr.’’

Her owner, Pattanadol Taesakul, 25, has a shop selling construction materials in Bang Bua Thong district in Nonthaburi. He bought Junior at a fair held at Muang Thong Thani last year. 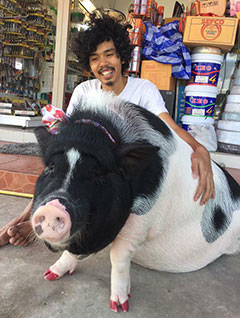 At the time she weighed only 3kg, and was on display at a booth selling pot-bellied pigs.  He thought she was cute and expressed his interest in her.

The seller told him it was a pot-bellied pig and would not grow any bigger.

So he decided to buy her, paid the 3,000 baht and named his new pet “Junior’’, Mr Pattanadol said on his Facebook page.

But a few months later Junior was still growing, getting bigger and bigger - and looked just like any other domestic pig.

The sow now weighs more than 150kg, and there's no indication she will stop there.

Mr Pattanadol realises the seller misled him, and Junior was never destined to remain a cute little piglet. But he loves her nonetheless, and says she even shares his bed.

He keeps updating the photos and detailing her activities on his Facebook page. A photo of Junior eating from a tray of fried rice, with sausage, fried noodles and bread, drew particular attention from many online users. 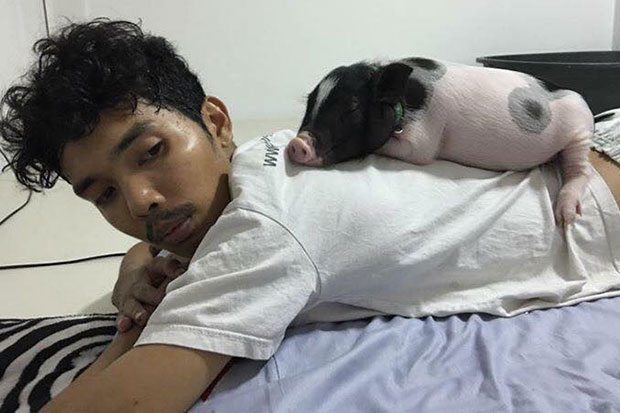 Mr Pattanadol and Junior, but she did not stay that size for long. (Photo taken from @Pigjuniorr Facebook page)

PHITSANULOK: The body of a man, who was reported missing three days previously, was found dead in the Nan river near Wat Chan Tawan-ok temple in Muang district on Monday afternoon.

KHON KAEN: Five passengers died and 12 others seriously injured after a Bangkok-bound double-decker bus they were travelling in went up in flames in Ban Haet district of this northeastern province in the small hours on Tuesday, police said.

Most elders 'don't need' outside help