A small boat flies a Chinese flag on the Mekong River. (Reuters photo)

KHON PI LONG, Chiang Rai -- China's plan to blast open more of the Mekong River for bigger cargo ships could founder on a remote outcrop of half-submerged rocks that Thai protesters have vowed to protect against Beijing's economic expansion in Southeast Asia.

Dynamiting the Pi Long rapids and other sections of the Mekong between Thailand and Laos will harm the environment and bring trade advantages only to China, the protesters say.

"This will be the death of the Mekong," said Niwat Roykaew, chairman of the Rak Chiang Khong Conservation Group, which is campaigning against the project. "You'll never be able to revive it."

Such opposition reflects a wider challenge to China's ambitious "One Belt, One Road" project to build a modern-day Silk Road through Asia to Europe.

Second Harbour Consultants, a subsidiary of state-owned behemoth China Communications Construction Corp (CCCC) said it was surveying the Mekong for a report that China, Laos, Myanmar and Thailand would use to decide whether blasting should go ahead.

It added that it was not tasked with the blasting, which would need to go to tender.

The company said in an email it had held meetings with local people "to communicate, build confidence and clear doubts".

China's foreign ministry did not immediately respond to a request for comment.

Clearing the Mekong for bigger ships is not officially a part of One Belt, One Road, a project announced in 2013. China blasted sections of the river in Laos several years earlier.

But some Chinese engineers involved in the survey speak of it as a part of the broader plan, and it is consistent with Beijing's Silk Road objectives.

Even in its Southeast Asian backyard, where it has sympathetic governments and ancient historical ties, China sometimes struggles to convince ordinary people that One Belt One Road will benefit them.

Thailand, Laos and Myanmar have approved the survey work, which is funded by China, but further studies and approvals are needed before blasting.

The Mekong River originates in the Tibetan plateau and cascades through China and five Southeast Asian countries.

China has built a series of dams along its stretch of the river that Thai campaigners say has impacted the water flow and made the regional giant hard to trust.

Chinese flags now flutter from company speedboats, while CCCC Second Harbour has met with Thai protesters three times since December in a bid to avert opposition to their work.

A unit of the conglomerate faced violent protests in January in Sri Lanka, where people objected to plans for an industrial zone in the south.

Chinese engineers on the Mekong said they were worried that Thai protesters would board the rickety cargo ship where they slept, prompting them to moor it on the Lao side of the Mekong each night.

"We are afraid for our team's safety," one engineer told Reuters, declining to be named because he wasn't authorised to speak to the media.

"We keep a low profile here," he added. "We want to do this project well and benefit Thailand, Myanmar, Laos, China, these four countries. This is not just for China."

China wants to remove rocks and sandbanks to allow ships of up to 500 tonnes to sail from its landlocked province of Yunnan to the sleepy Laotian town of Luang Prabang.

That would expedite the shipping of Chinese freight deep into northern Laos, said Paul Chambers, an expert in international relations at Thailand's Naresuan University.

"Luang Prabang may seem sleepy, but northern Laos ... represents a hub of Chinese influence," he said. 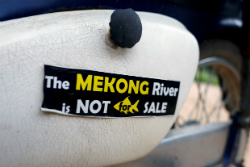 Despite reassurances from CCCC Second Harbour, some locals still believed the engineers were marking out areas for blasting, said Niwat, who represented campaigners in meetings with the Chinese company.

His group draped a large white banner reading "Mekong Not For Sale" on the bank overlooking the Pi Long rapids, whose name in Thai means "lost ghosts."

"At the moment we're only thinking about the economy and the earning figures without considering the unimaginable value of the eco-system to humanity," he said.

The military seized power in Thailand in 2014 and banned gatherings of five or more people.

But Narongsak Osotthanakorn, governor of Chiang Rai - the Thai province where the Mekong is currently being surveyed - said people could "protest freely" against the Chinese plan.

Mr Narongsak said the survey was the first stage in a process that would include an environmental study, public hearings and negotiations between China, Thailand, Myanmar and Laos.

While he wouldn't say whether or not he supported blasting, Mr Narongsak said local people had much to gain from increased river trade. "I think no country would be happy to lose the benefits," he said.