Four British nationals, aged between 20 and 27, under arrest on theft charges at a luxury resort on Koh Samui in Surat Thani province on Monday. (Photo by Supapong Chaolan)

SURAT THANI - Four British nationals have been arrested and charged with the theft of goods worth about 50,000 baht from a toy shop on the tourist island of Koh Samui.

Police seized the four men at a seaside resort in tambon Bo Phud, in Koh Samui district, on Monday.

They also seized stolen items, including an aerial drone, a game disk, an iPhone charger and a radio-controlled car, worth about 50,000 baht in total, police said.

The goods were reported stolen from a toy shop in tambon Mae Nam around 9pm on Sunday by four men who fled in a white Fortuner car. They were filmed by a security camera inside the shop.

The four tourists admitted to having stolen the items, according to police, and were charged with theft.

While police were still questioning them, an employee at another hotel arrived at the resort and accused the four tourists of failing to pay a food and drinks bill of 69,000 baht.

He told police the tourists had checked into two rooms for three nights and paid the 60,000 baht cost via an agency. On Sunday night they had ordered meals and drinks, including foreign whisky priced at 29,000 baht a bottle.

Afterwards, one of them had paid the 69,000 baht bill with a credit card, but the payment failed. The tourists then said they would pay the bill on Monday, but instead fled the hotel on Sunday night. After negotiations, the suspects agreed to pay the bill.

They were held in police custody for legal action.

According to Thai media reports, the men tried unsuccessfully to bribe the arresting officers.

The cost of the rooms at the luxury seaside resort where they were caught was reported to be 35,000 baht a night. They had booked the room for five days, but were arrested and taken away. The card used to pay the food and drinks bill was also reported to be fake. 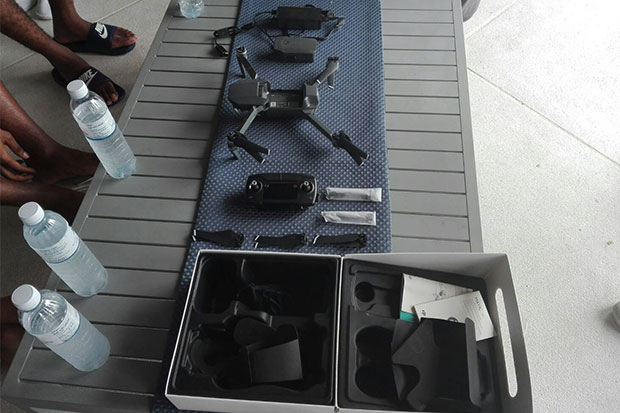 Stolen goods found in a resort room on Koh Samui in Surat Thani where four British nationals were arrested. (Photo by Supapong Chaolan)