A DSI official inspects supercars in the showroom of Niche Cars Group near the Bangkok-Chon Buri motorway in Suan Luang district, Bangkok, on Thursday. (Photo by Patipat Janthong)

The Department of Special Investigation (DSI) impounded 60 luxury cars, mostly Lamborghinis, from Bangkok showrooms on Thursday on suspicion of evasion of import taxes and other tariffs.

The seizure began with searches of nine premises. They included Niche Cars Group in Suan Luang district, its showroom at Siam Paragon shopping centre in Pathumwan district, STT Autocar on Thiam Ruammit in Huay Khwang district and a used car dealership on Pradit Manutham Road in Bang Kapi, where the vehicles were kept.

Some of the searched houses belonged to an accountant working for the importer, Niche Cars Group, and its director.

DSI deputy director-general Korawat Panpraphakorn alleged invoices for the cars had been forged to show unrealistically low prices, a deception intended to reduce the import tax and other charges.

During the searches, the DSI impounded 60 supercars. Forty of them were Lamborghinis and the others mostly Ferraris and Lotus models, Pol Lt Col Korawat said. The cars were left where they were, but must not be sold or moved off the premises.

Dusadee Arayawut, deputy permanent secretary for justice, said the importer of the cars also sells them, and 110 government officials at operational and executive levels were suspected of colluding in the alleged offences.

The raids followed an investigation into the importation of luxury cars launched after four of six supercars on a transporter were destroyed when it caught fire in Pak Chong district, Nakhon Ratchasima, in 2013.

The truck was taking them to Si Sa Ket province. Investigators concluded it was part of an illegal operation taking luxury cars to remote provinces where they could be more conveniently registered with the aid of Land Transport officials. 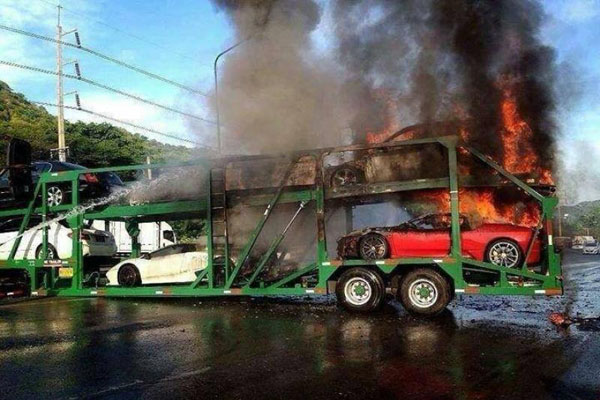 The fire on this transporter in Nakhon Ratchasima province in June 2013 sparked an investigation into the evasion of taxes by  people selling and buying luxury supercars. (Photo by Prasit Tangprasert)

Thai Bankers' Association president Predee Daochai is tipped to be the next finance minister, according to Thai media.

India locks down 125 million as virus surges across globe

PATNA, India: More than 125 million people in India began a new lockdown on Thursday as authorities worldwide scramble to get a handle on a surge in coronavirus cases that continues to wreak havoc from America to Asia.