Authorities say a bomb at a hospital in Bangkok has wounded 21 people.

The blast went off at 10am on Monday in the dispensary's waiting room for commissioned officers at Phramongkutklao Hospital, an army-run facility which also treats civilians, on Ratchawithi Road in Bangkok, according to Thai media.

Several glass partitions in the area were broken in the blast, which emitted smoke but no flames.

Authorities step up security measures at Phramongkutklao Hospital in the wake of the blast. (Video by Pornprom Satrabhaya)

Lt Gen Saroj Keokajee, commander of the Army Medical Department which supervises the hospital, said in the evening 21 people were wounded. Thirteen of them have already been discharged while the remaining eight are still being monitored at the hospital.

Most of the victims were retired officers, one of whom was a woman hit in the face by shrapnel and needed a surgery.

It was believed at the time the blast might have been caused by gas leak as there were several pipes and cables in the undermaintained air-conditioning ducts.

But after deputy police chief Srivara Ransibrahmanakul checked the scene in the afternoon, he told Thai media the incident was a bombing.

"We found pieces of a circuit and a battery, as well as some wires. We'll investigate further but initially we found the explosive had a range of 2-3 metres," he said.

The perpetrators might have put the bomb in a container and placed it near the entrance of the dispensary, which was an open area, he added.

It was too early to say whether the explosion was linked the bombings in front of the National Theatre last week and the Government Lottery Office on April 5, or whether it targets lives, he said, adding explosive ordnance disposal officials are investigating.

"We condemn the perpetrators. Even in the three southernmost provinces, no attempts have been made on hospitals," he said.

Government spokesman Lt Gen Sansern Kaewkamnerd said it was too early to tell whether the bombing was linked to the third anniversary of the coup and the National Council for Peace and Order.

The entire building was closed so sniffing dogs could check for more explosives.

Thai media reported at 4pm OED officials had found traces of gunpowder in a PVC pipe, which had been hidden in a vase. They also found many nails, supposedly used as shrapnel.

The evidence was similar to what was found after the bombing in front of the National Theatre last week, they said.

They said the incident took place in a VIP zone of the hospital where there were closed-circuit cameras. 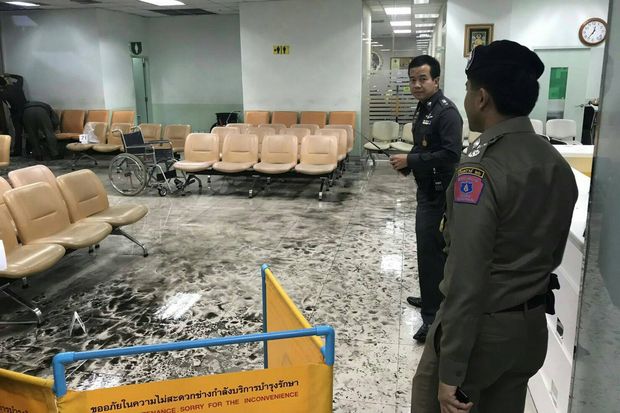 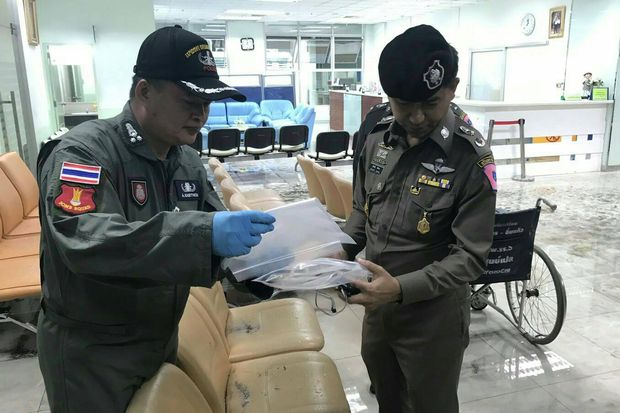