Killing someone in cold blood takes a special kind of mindset, where by "special" we mean brutally disordered. Choking and then battering the victim, then saying "Now hand me the saw" is well beyond special.

That's what a woman in Khon Kaen apparently did to her friend in the middle of last month. Between choking the victim until she was unconscious and literally sawing the body in half, she put a plastic bag over the friend's head and beat her with a wooden stave until she probably was dead. Maybe.

Then she asked for the saw. She had stopped at a hardware store on the way to the killing ground to buy the saw.

The cover photo of Ms Preaw's Facebook page is the bloodiest available stock photo of Chucky and Bride of Chucky Tiffany. The photos feature Ms Preaw, over and over.

The victim was Warisara "Am" Klinjui, who worked in a karaoke bar. She also was a police informant.

Before she was murdered (obviously), she informed on the drug-dealing husband of her friend, 24-year-old Preeyanuch "Preaw" Nonwangchai, a hard-living girl who always had plenty of money and nice stuff.

Then the horrible thing happened. A dumb or ill-intentioned Khon Kaen policeman told Ms Preaw who was the snitch behind the arrest of her husband. Police and prosecutors believe Ms Preaw and several friends abducted, killed, mutilated, bagged and buried Warisara for grassing.

They dumped her body in a very shallow hole in a nearby forest and, of course, it was quickly found by a passer-by. Headlines ensued.

As a story, this nightmare murder is a crime reporter's dream. It has all the ingredients of a best-selling paperback procedural, followed by a movie or mini-series or, heck, both. It ticks every box: sex in various permutations (yes, toms), Psycho-Girl, Good Citizen Am, Facebook (bonus: bloody Chucky doll as startling cover photo), drug trafficking and drugs up the nose -- plus big boobs.

Followers (now 200,000-plus; blame notoriety) watch Psycho Girl roll in money, travel, wear Gucci and Fendi. And as the hunt for Thailand's most wanted fugitives plays out, the country is abuzz, partly because of short memories. 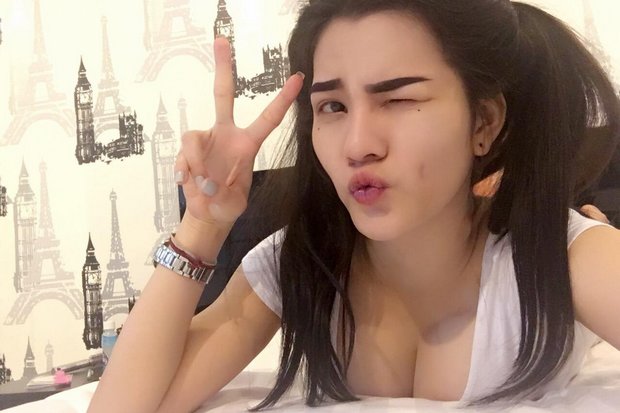 Butchery of victims certainly isn't new. In the last three years, there have been four sensational cases.

A year and a half ago, Spanish resident Artur Segarra Princep, 38, killed his "friend" David Bernat, put bits of his corpse in plastic bags and tossed them into a couple of klongs and the Chao Phraya River -- without weights. It didn't take a day to solve that crime.

Ms Preaw isn't even the first woman. In 2015, the lovely Pornchanok Chaiyapa was 47 years old and winning praise for the loving care she was providing to nice old, bed-ridden Yoshinori Shimato. She suffocated him with a pillow and stabbed him repeatedly and with her brother's help cut the body into pieces.

Then they drained 500,000-plus baht from his bank account and hocked his watch and other male jewellery for an additional 41,500.

Shimon Biton and his 17-year-old son allegedly plastered the pieces of 63-year-old Israeli compatriot Eliyahu Cohen behind the walls of their Nonthaburi home. Police investigating a passport forgery ring run by a US-directed gang stumbled across the six body parts of an American resting since at least 2008 in a large freezer, like it was Villa Supermarket.

But the cut-up Crime of the Century was in 2001 when the physician Wisut Boonkasemsanti killed his wife (also a doctor) and surgically made her body into pieces tiny enough to flush down toilets in a Chulalongkorn University dormitory and, when that toilet started to clog, a second toilet at the Sofitel Central Hotel in Lat Phrao. Wisut was sentenced to life in prison in 2003 but being a model prisoner was released three years ago after just 10 years and seven months.