KATHMANDU - Asia's best-known serial killer who started his chain of deaths in Thailand has survived government-provided heart surgery outside his Nepal prison cell.

Sobhraj underwent a five-hour surgery to repair the valves in his heart.

Dr Raamesh Koirala - one of three surgeons involved in the complicated procedure - said Sobhraj would remain sedated for 24 hours.

"We cannot say he is out of danger for 24 hours and maybe longer. But the operation was normal," said the surgeon.

Dr Koirala caused a minor kerfuffle with the manner he tweeted about his operation, and the seemingly chummy photo he sent of himself with the serial killer.

Yes! He has a heart and I just fixed valves inside. Recovering normally. #Charles #Sobhraj pic.twitter.com/nTFe90XJM9

Sobhraj's wife Nihita Biswas, who the killer married in prison, said that, "The good news is that the operation was a success", according to a report by the AFP news agency.

"It was a four-hour surgery but they had to extend it for another hour because they found that the other valve was also damaged. Right now they say that he's stable."

The doctor was savaged on social media for the tweet and photo.

"Good job as a doctor, but that hug is a bit disturbing!" was one reaction. "insted of fixing heart of such criminal #sobhraj , u could have fix heart of noble men of URnation", said another.

Good job as a doctor, but that hug is a bit disturbing!

the most insane act, insted of fixing heart of such criminal #sobhraj , u could have fix heart of noble men of URnation

Sobhraj has been in a Nepal jail since 2004, when a court sentenced him to life in prison in the 1975 killing of a Western backpacker. 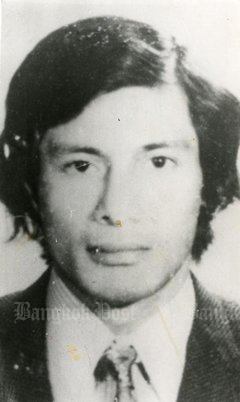 This was the photo on the wanted poster for Sobrahj aka Alain Gauthier, the name he used while killing at least five foreigners in Thailand before 1976.

But his gory trail during the 1970s claimed victims in Thailand, Afghanistan, India, Turkey, Nepal, Iran and Hong Kong.

In Thailand he killed an unknown number of foreign backpackers, young tourists he pretended to befriend only to then abduct and kill, often in the most horrible matter such as burning a Dutch couple alive, and drowning an American woman in Pattaya. The latter murder earned him the nickname of 'bikini killer'.

He has confessed to five murders in Thailand.

The Frenchman in the past has admitted killing several Western tourists, and is believed to have murdered at least 20 people.

He was detained in Thailand after an investigation by diplomats, but "escaped" to Malaysia and then to India, where he resumed killing.

He was convicted of murder for the first time after he came to Nepal as tourist in 2003 and police were tipped by a journalist. He was arrested and found guilty by a court the following year.

Sobhraj was held for two decades in New Delhi's maximum-security Tihar prison on suspicion of theft, but was deported without charge to France in 1997. He resurfaced in September 2003 in Kathmandu.