Temples may be forced to disclose assets

The National Office of Buddhism (NOB) will set up a special committee to expand its investigation into allegations of corruption in its grant-in-aid scheme for temples nationwide.

Pol Lt Col Pongporn said Mr Ormsin expressed his concerns and has ordered the NOB to set up a special committee to widen its probe to cover the whole budget of its grant-in-aid scheme.

The NOB director-general explained that the office now provides grant-in-aid for Buddhist temples nationwide to the tune of around 4 billion baht a year. The budget is largely allocated in four ways.

"Position allowances for head monks are not what we are worried about; it's the other three categories where funds are allocated," he said.

Pol Lt Col Pongporn said the NOB and police investigation at present only covers the budget concerned with the maintenance of temples, so Minister Ormsin demanded the NOB investigate more deeply the education funding and promoting religious activities as he suspects more irregularities into those grants will be found.

"After the special committee is set up, any state officials or monks found involved in any embezzlement and found guilty will be charged under the law. If they are monks, they will also be audited by ecclesiastical monks. If they are NOB officials, they will face disciplinary action," he said. 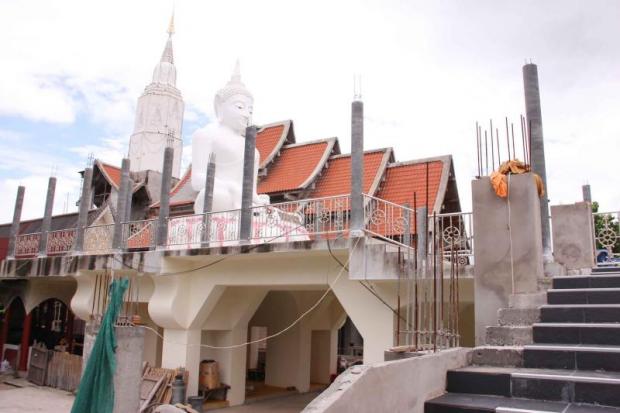 Construction is under way at a temple in Lampang as the National Office of Buddhism sets up a special committee to investigate alleged corruption in its grant-in-aid scheme for temples nationwide. (Photo by Aswin Wongnorkaew)

Although there is a ministerial regulation that requires temples to have wardens doing their accounts for them, most temple accounting systems are disorganised and prone to corruption, he said.

"If we want to reform the system, we may have to propose legal amendments to regulate temple accounting systems to be more transparent and effective," he said.

Deputy Prime Minister Wissanu Krea-ngam said he and Mr Ormsin had talked about public calls for the disclosure of temple assets to ensure transparency.

He said the NOB and the Sangha Supreme Council of Thailand will be asked to map out guidelines for the practice. The deputy premier said measures should be in place to ensure transparency of temple assets.

The practice must not contravene laws or the doctrine of the Buddhist monks or hurt people's feelings, he said.

He said although temple caretakers, in principle, are assigned to take care of temple money, some temples fail to appoint them. Some caretakers cannot deal with the issue as there are other influential figures manipulating a temple's affairs, he said.

Pol Maj Gen Kamol Reanracha, chief of the police Counter-Corruption Division (CCD), said the four NOB officials have been charged with malfeasance and embezzlement in connection with the temple embezzlement scandal. Another four civilians were also implicated in the offence.

Among them are a former director-general of the NOB and a deputy chief of the agency, he said, adding they were reported to have gone overseas.

The National Anti-Corruption Commission (NACC) will be contacted this week to consider grounds for guilt against the officials involved.

A NOB officer and another former officer from the agency have acknowledged charges, Pol Maj Gen Kamol said, adding the first confessed to the allegation, while another denied it.

According to Pol Maj Gen Kamol, so far 12 temples in Lampang, Phetchaburi, Amnat Charoen, Lamphun and Ayutthaya were suspected of involvement in the embezzlement of maintenance funds.

He said the CCD will investigate more than 100 temples suspected of misusing state funds, across the country. The scandal may have caused up to 600 million baht in damage to the state.

Meanwhile Paiboon Nititawan, former chairman of the National Reform Council panel on Buddhism reform, said he will submit a petition to the Public Sector Anti-Corruption Commission's (PACC) this week requesting it investigate abbots of the 12 temples allegedly involved in embezzlement.

Mr Paiboon said there are some grounds to the charge since all the abbots are the ones who oversee the temples' bank accounts. When all the illicit money was transferred to temples and temples returned 75% of the money to the embezzlement gang, all transactions needed their signatures.

"The abbots cannot deny their involvement. They are definitely involved in the network," he said.

"All parties involved in this corrupt network must be punished because they stole temple money which came from taxes paid by all Thai people," he said.

"We should reform the financial management of all temples to stop history from repeating itself," Mr Paiboon added.