Expert says govt should look beyond dams to prevent disasters

The historic economic loss caused by mega-floods which hit the Central region in 2011 is still haunting the government today as pressure mounts for it to come up with a concrete plan to prevent or limit any damage that might happen again in the future. 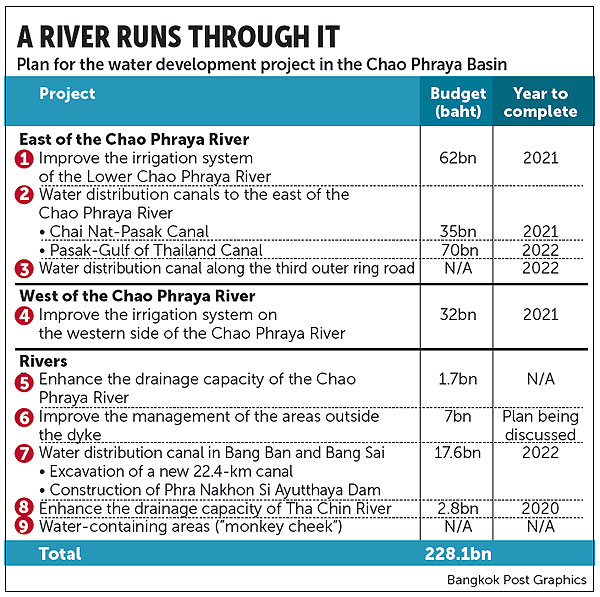 To boost confidence among the public and investors in effective water management, the government in 2015 came up with its Strategic Plan on Water Management (2015-2026), which the government last year decided to extend by 10 years. It is now the Strategic Plan on Water Management (2015-2036) -- a process of reviewing carried out by related agencies.

It is expected to be submitted for cabinet approval in the next couple of months.

Somkiat Prajamwong, deputy director-general of the Royal Irrigation Department, said in the last two years small projects with less impact on the environment and communities were completed. During that time, however, studies were undertaken on larger-scale projects that will help in effective water management.

From next year, the department is going to start mid and large-scale water management projects.

"Next year will be the year for laying down the fundamental projects on water management. We can see a big change in the country's water management even having implemented only half our action plan. We have placed our hopes in that at least 50 percent of the plan can be achieved because some things might not be achievable due to the problem of city expansion and other factors," he said.

He further explained that there are around 100 projects that are ready to be done in the next five years, including the construction of 50 mid-size reservoirs, 19 water sluice gates in the mainstream rivers countrywide to keep water in the river during the dry season, together with increasing the water storage capacity of 400 reservoirs countrywide, which could reserve more 400 million cubic metres of water.

According to the plan, the government is aiming to increase irrigation areas to 17.95 million rais and increase water storage to 13.24 billion cubic metre over the next 20 years. Many families stand to benefit from the project, which has a budget of 3.3 trillion baht. A campaign to reduce water consumption by 10% is also included in the plan.

"If you ask me whether it is costly, I would say so. But compared with the loss of 1.44 trillion baht or more in the future, it is the thing that we ought to do," he said, adding that the plan can't prevent flooding, but it can limit the damage with a better water drainage system.

According to the lower Chao Phraya River basin water management, it has included the new canal constructed in Ayutthaya's Bang Pa-in district. The canal would begin in Ayutthaya's Bang Pa-in district and end in Samut Prakan, covering 112 kilometres and accommodating a water flow of 500-1,000 cubic metres per second. The canal will be 100-160 metres wide.

Agriculture and Cooperatives Minister Chatchai Sarikulya has said the Royal Irrigation Department the canal would be a very crucial instrument for water management during the rainy season as it would help divert water from the Chao Phraya and the Pasak.

The department has been working closely with the Japan International Cooperation Agency on the project's feasibility study, which is expected to be completed by next year.

Hannarong Yaowalers, chairman of the Thai-Water Partnership, said that the strategic plan on water management is acceptable to a certain point, especially in efforts to distribute water to all villages countrywide.

But most of the projects still focus on the construction of physical infrastructure, especially dams, which in fact are not a perfect answer to drought and flooding.

"Apparently, according to the plan, hardware construction is the key solution to water management, which is not true. The department should have presented alternatives in case the physical structures are is not feasible. And of course, many of them can't happen as the plan has lacked the public's participation," he said.

He raised a case in which locals protested against dam constructions in Nakhon Si Thammarat province proposed by the department after heavy floods hit the southern region last year, saying similar cases will happen everywhere if there is no public participation on water management.