Senior police handling the sexual abuse against a music teacher in Kalasin's Huai Mek district meet on Friday to discuss the case. (Photo by Yongyut Phupuangphet)

KALASIN - A music teacher at a public school is being held on charges of sexually abusing an 11-year-old student and threatening to shoot her dead if she told anyone.

Chayakorn Wongkhamharn, 46, surrendered to Huai Mek police on Wednesday to acknowledge charges of sexually assaulting a girl under 13 years and depriving her of parental care. He denied all charges.

Police took him to  Kalasin provincial court and successful applied to detain him, Pol Col Chanawat Deebunmee, chief of Huai Mek police station said on Friday. He was not released on bail.

The scandal came to light when the young student's parents filed a complaint against Mr Chaiyakorn, the girl’s classroom adviser and music teacher at a state-run school in Huai Mek, accusing him of sexually abusing her.

The teacher allegedly threatened to shoot the girl dead if she told anyone about it.

The girl told police the first assault was around 8.30pm on May 20, when Mr Chayakorn asked her to attend music practice at the school. When she entered the classroom he followed her inside and allegedly punched her in the stomach. He then locked the door and allegedly raped her.

She said that on June 15 he again asked her to meet him at the school at 8.30pm, when he would give her homework. She went there by motorcycle. He led her to the same classroom and allegedly sexually abused her again.

When the girl's parents arrived at the school looking for her, he allegedly restrained her in the classroom and prevented her making any noise.  He later took her to a cassava field behind the school, pulled out a gun and threatened to shoot her if she shouted for help or told others what happened.

He then took her for a walk through paddy fields and sugarcane. When they arrived at a nearby village he asked a resident to help the girl get home, she told police.

She immediately told her parents what had happened, said Pol Col Chanawat.

Police took the girl to a hospital for a medical examination.They were awaiting the results, the Huai Mek police chief said. 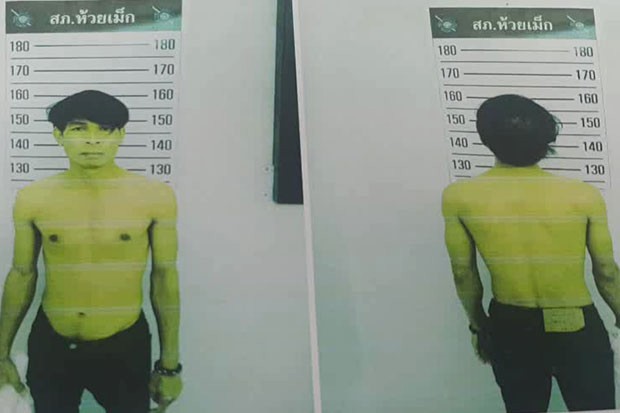