This cheap pillow emblazoned with a cartoon rabbit, bought at a weekend market, was found to be stuffed with cut up diapers and sanitary napkins by a shocked Si Racha woman who had used it for two years. (Photo taken from Neramit Tao Malaiwong Facebook account)

CHON BURI - A woman in Si Racha district was appalled to discover a pillow she had slept on for two years was stuffed with cut up diapers and sanitary napkins.

Images of the diaper-stuffed pillow went viral after they were posted on Facebook by her younger brother Neramit Malaiwong on Monday.

Mr Neramit said his elder sister Chalinee Changlao had bought four pillows at a weekend market in the district at 50 baht a piece about two years ago. She had used one of the pillows, and over time had noticed it became hard and then even harder.

There was a split in the pillow. His sister became suspicious and wanted to know what was inside. When she drew the stuffing out she was horrified to see it contained cut up disposable diapers and sanitary napkins.

Ms Chalinee was very upset as she did not know whether they were used before they were stuffed in the pillow, said Mr Neramit.

He and his sister then tore open the three other pillows bought at the same time to see what was inside them. The results were the same - all were stuffed with pieces of diaper and sanitary napkins mixed with some kapok or cotton.

Mr Nerami said it was clear people must be careful when buying pillows being offered at cheap prices, as they might find something unpleasant inside. 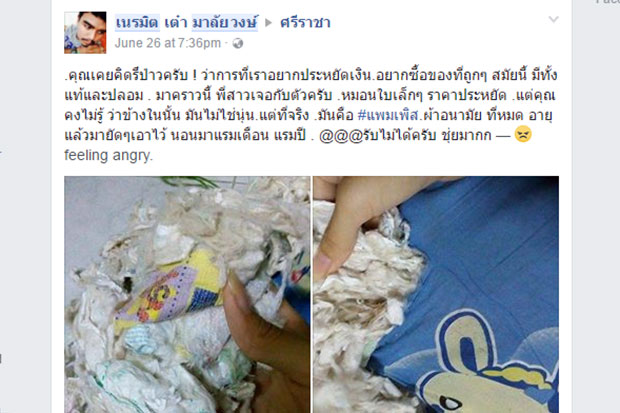 Mr Neramit Tao Malaiwong of Chon Buri's Si Racha district poses images of one pillow found to be stuffed with pieces diapers and sanitary napkins on his Facebook account on Monday.