Investigators from Bangkok are on their way to Koh Tao to look into the mysterious death of a Belgian tourist on the resort island in April.

Pol Gen Chakthip Chaijinda, the national police chief, ordered the Crime Suppression Division (CSD) to look into the case of Elise Dallemagne, after her mother expressed strong disbelief at the local police finding that she had hanged herself.

Dallemagne was found dead on April 27, just a month before her 31st birthday.

Pol Maj Gen Suthin Supphuang, the CSD chief, said his investigators would look closely at all the evidence, including footage from CCTV cameras around the crime scene, and question witnesses.

Investigators from the Koh Tao police station, who found the woman's body at Tanote bay on April 27, said she had a rope around her neck and was hanging from a tree. It was believed she died around April 23 or 24.

Dallemagne had arrived on the island in Surat Thani on April 19 and checked in to a wooden bungalow that day. There was a fire that night and some bungalows, including the one where she was staying, were burned down.

Koh Tao police chief Pol Lt Col Chokchai Sutthimek said on Thursday that the woman had escaped from the fire on that night. 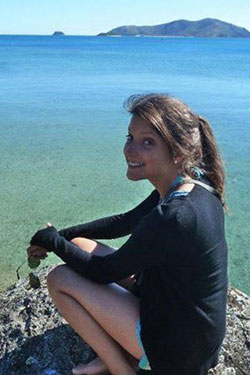 It was unclear where she went, but Channel 3 news reported on Friday that she was seen at Tanote bay on April 21 buying a ferry ticket to Chumphon, and had planned to leave the island on April 24.

Dallemagne told her mother on April 17 during a conversation on Skype that she was returning to Belgium from Thailand. She had been travelling around the world, mostly in Asia, for 18 months.

She died of suffocation from lack of oxygen, according to the autopsy findings at the Surat Thani Hospital and the Institute of Forensic Science at Police General Hospital in Bangkok. Her body was later cremated.

Chalermsak Saithanu, one of the rescue volunteers from the Sattha Koh Tao Foundation, recalled the scene where the tourist was found on April 27, saying her body was tied to a nylon rope from a tree between some rocks.

They also found a mobile phone, a purse, one bottle of whiskey, a bottle of benzine and a handwritten letter, he said, adding that all were kept as the evidence by police.

Longma Siriwat, the owner of Triple B Bungalows where Dallemagne had checked in, said the woman had planned to stay for two nights but disappeared after the fire on the first night.

The fire started in her bungalow before spreading to other rooms but she did not file a complaint to police.

Pol Lt Col Chokchai said on Thursday that the woman's mother, Michele van Egten, did not believe that her daughter had committed suicide.

Pol Maj Gen Pornchai Sutheerakun, director of the Institute of Forensic Science, said on Friday that the institute had forwarded the autopsy report to Koh Tao police for the reopened investigation.

At least seven foreign tourists have died on Koh Tao over the past four years, some in strange or unexplained circumstsnces. The most notorious case involved the slayings of British tourists Hannah Witheridge and David Miller in 2014. Two labourers from Myanmar were convicted and sentenced to death -- the case remains under appeal -- after a widely criticised police investigation.