Propaganda leaflets handed out by the Myanmar army in the Lashio region warned of an 'imminent' terrorist attack and carried commentary on regional ethnic armies. (DVB)

Myanmar government forces have distributed leaflets in the Shan State city of Lashio, warning residents of an imminent attack by the Kachin Independence Army (KIA) and Ta'ang National Liberation Army (TNLA), with the army on "high alert".

A spokesperson for the KIA on Monday denied any such plans and accused the Tatmadaw (Myanmar military) of "spreading lies". He called the warnings a "misinformation campaign" that was only a veiled threat against the local population.

Neither the Kachin Independence Army nor the TNLA have signed the government-backed nationwide ceasefire agreement. Both groups have been regularly engaged in armed clashes against the Myanmar army in northern Shan State and next-door Kachin State.

The leaflets, which were distributed by Myanmar soldiers to people in the street and at their homes, say that the Tatmadaw have received a tip-off that the Kachin and Ta'ang ethnic armed groups are planning a "terrorist attack" in Lashio Township. The leaflets warned that public markets, government buildings and Lashio railway station could all be targets for bombings.

According to the leaflets, the KIA has sent six men and four women to Lashio to carry out a bomb attack. It says that prior to this, 20 insurgents with expertise in bomb-making were sent into the town on a reconnaissance mission "to determine the best targets".

The propaganda pamphlets also contain graphic pictures reported to show dead victims of the ethnic armies, as well as scenes of torture.

Government forces' Tactical Operations Commander Col Kyaw Than Swe said that the pamphlets were intended as a public safety measure, and he called on all local residents in Lashio to assist in preventing acts of terror.

According to Lashio residents who spoke to DVB, the Myanmar army has beefed up security in the town, including patrols in armoured vehicles.

Lashio, about 200km northeast of Mandalay, has a population of around 130,000, made up mostly of Shan, Burman and Chinese residents. 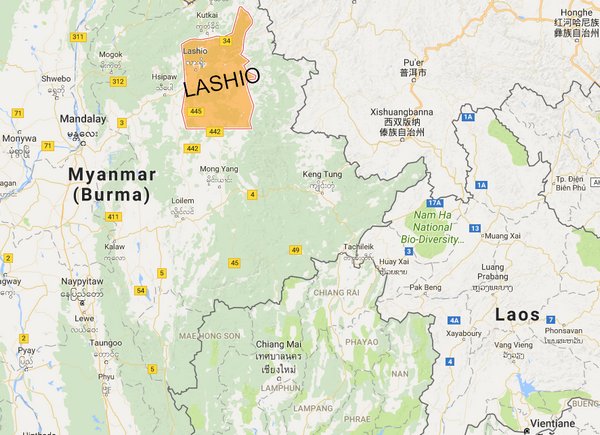 A spokesperson for the Shan State police force, Pol Col Aung Myat Moe, said Monday that he would not accuse the KIA and TNLA directly, but believed that "ethnic armed groups" were planning an attack. He identified Pyi Htaung Su Main Road, which is the highway heading north from Lashio to Hsipaw and Muse, as a likely target.

Aung Myat Moe said that police were stationed at busy areas in Lashio Township to monitor "any suspicious people".

"I would think that bridges would be the targets for bombing attacks," he said. "However, we will not accuse any ethnic armed group by name. We do not want to accuse anyone without evidence."

In response, Col Naw Bu, the spokesperson for the KIA, told Democratic Voice of Burma by telephone Monday that the Kachin group did not participate in terrorism nor would it conduct an operation that would cause civilian casualties.

He accused the Tatmadaw of "spreading lies" with the intention of "damaging the dignity" of the KIA and TNLA among the public.

"The Burmese military are actually threatening the public," he continued. "We, the KIA, would never act like that. We only attack the Tatmadaw – never innocent people."