Gen Prayut urged the public Tuesday to understand the air force is in need of new trainer jets to replace the ageing Czech-made L-39 aircraft which have been in service for more than 30 years, while noting that those who suspect any irregularities are welcome to look in to the programme. 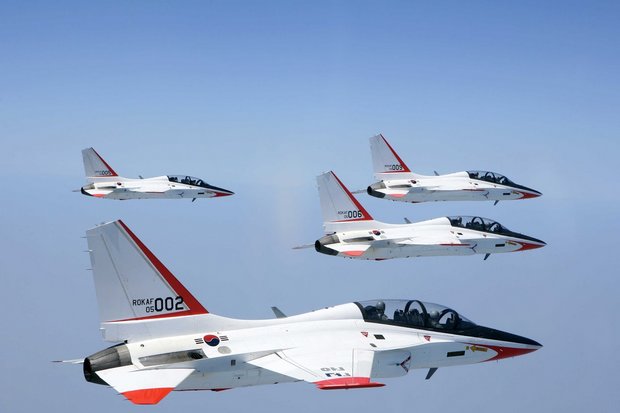 Cabinet has approved purchase of another eight T-50 jet trainers from South Korea for another 8.8 billion baht. (Photo provided)

Buying from South Korea should offer proof the government does not favour any specific country for procurement, he said.

"Please understand the government does not throw state money into just buying military hardware and weapons as some people claim. The government has approved agricultural sector budgets of 20-30 billion baht a week on average. Budgets for each sector are separate," he said.

Critics say the military regime has spent lavishly on military weapons and hardware. Purchases include tanks, armoured vehicles and a submarine from China, helicopters from Russia and the procurement of four Black Hawk helicopters from the United States. (Story continues following the infographic) 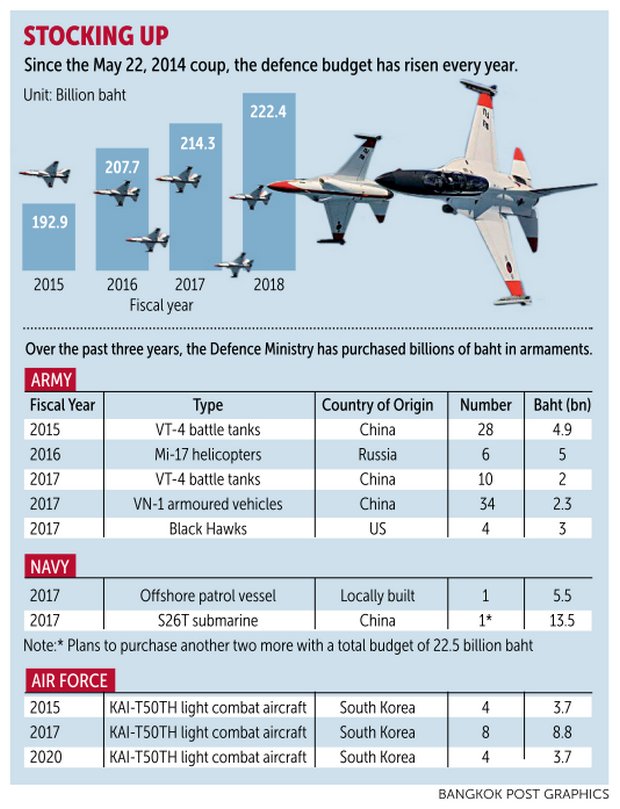 Srisuwan Janya, secretary-general of the Association to Protect the Thai Constitution, is among critics of the aircraft purchase plan. He said the government should postpone the procurement of the trainer jets and use the money to shore up prices of agricultural products which have fallen to new lows.

He also threatened to seek a legal challenge in the Constitutional Court if the cabinet fails to delay the purchase, saying the project would be in violation of the charter which calls for fiscal discipline for the sake of the nation. The Pheu Thai Party's Anusorn Iamsa-ard echoed Mr Srisuwan's concerns and called on the government to suspend the purchase.

However, Gen Prawit downplayed the decision, saying the proposal was just for the cabinet's "acknowledgement" as the cabinet had in fact approved the procurement of 16 T-50 jet aircraft in October 2014. The air force has so far bought four of them from South Korea which plans to deliver the aircraft early next year.

The matter which went before the cabinet Tuesday was intended to inform the cabinet the plan was to enter the second phase. The procurement will be financed by the air force's tied-over budget allocated for the scheme during 2017 to 2020. Gen Prawit insisted the jet trainer procurement scheme, which would be carried out in the government-to-government format, was transparent and necessary.

The first batch of four T-50 jet trainers will be deployed at Wing 4 in Nakhon Sawan's Takhli district. Six air force officers are undergoing training. A source said the air force is scheduled to sign a deal for the second batch in South Korea on July 29 with Korea Aerospace Industries (KAI).

According to a source, maintenance costs of the ageing L-39 trainer jets have increased lately as their technology is obsolete.