Wijitra "Ann" Boon-in, 14, strikes a martial pose for a photograph at her house in Sukhothai province on Wednesday. (Photos by Phubet Faithes)

SUKHOTHAI - A 14-year-old girl taught Muay Thai by her father is boxing successfully in competitions in her home province and nearby, helping support her grandmother and pay off the family house.

Wijitra "Ann" Boon-in, a student at Ban Dan Lan Hoi Wittaya School in Ban Dan Lan Hoi district, said on Wednesday her late father was a Muay Thai boxer. He had passed his love of the sport on to her and began training her when she was in Grade 6. She started fighting in the ring when she entered secondary school.

"I dream of becoming a physical education teacher because I love this field. I think it would be a secure job and I would have a regular income to take good care of my grandmother."

She said her father died in an accident last year. Her mother had walked out on them when she was 8 months-old, and he and his mother had raised her.

Wijitra said she would like to meet her mother sometime.

Amporn Boon-in, the 58-year-old paternal grandmother, said that in addition to bringing home money from boxing, Wijitra helped her take care of the house and to sell fruit and vegetables at a wet market.

Grandma Amporn said she earned 180-200 baht a day from selling bananas, salted eggs and pickled bamboo shoots. She gave 30 baht to her granddaughter each day before she left for school - and she always gave her back 15 baht when she returned home.

Mrs Amporn said their house was built using money her late son had borrowed. She and her granddaughter were trying to repay the loan. But the house still lacked a toilet, a kitchen, stairs and a back door. 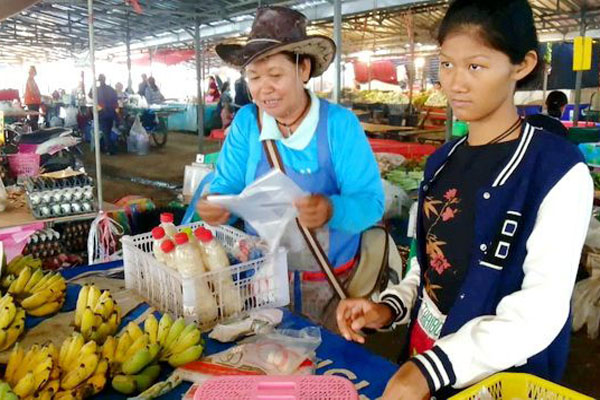 Ann helps her grandmother at the local food market.

RATCHABURI: Police are stepping up their hunt for an armed man who made off with almost 780,000 baht worth of gold after holding up a shop in Baan Pong district on Thursday.