The European Union will keep its 'yellow card' pressure on the Thai fishing industry, still not up to EU snuff. (Bangkok Post file photo)

The government's efforts to combat Illegal, Unreported and Unregulated fishing (IUU) are unlikely to satisfy the European Commission (EC) as it is likely to maintain its official warning or so-called "yellow card" on the country, says a source.

The EC notified the Ministry of Agriculture and Cooperatives last week that Thailand should do more to curb IUU activities despite the government having spent the last three years dealing with the problem, the source at the Department of Fisheries said.

"It seems we are still subject to the yellow card," he said. "However, the EC has praised us for the measures we have taken, many of which have led to positive developments."

EC representatives visited the country from July 1-16 to follow up on the progress made in rooting out illicit practices from its fishing industry. They raised concerns about the employment of illegal workers, the use of illicit fishing tools causing devastating damage, and the lack of a reliable monitoring system for fishing activity. 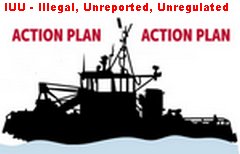 Thailand received its first yellow card in April 2015. This was seen as a warning ahead of a possible ban on EU imports of processed seafood if substantial measures were not taken to resolve IUU issues.

The government exercised the all-powerful Section 44, which has been carried over to the new charter, to fast-track the enforcement of new laws to crack down on violations.

This included making all trawlers subject to thorough checks, establishing a single Command Centre for Combating Illegal Fishing, setting up a Vessel Monitoring System, and establishing a Port In-Port Out and tracking system.

It also included the promulgation of a royal decree on fishing in 2015 to stamp out illegal activities in this area.

Agriculture Minister Gen Chatchai Sarikulya was expected to brief the media Monday on the results of the government's efforts so far.

In another development, representatives from the Federation of Thai Fisherfolk Association asked the government on Monday to abolish Section 34 from an amended version of the 2015 royal decree on fishing. They said it was unfair to local fisherman and hurting the industry.

Sama-Ae Jaemoodor, who chairs the federation, said the law stops fishermen from working offshore, as they have done traditionally, but lets commercial trawlers do so as they can get permits made by the chief of the Department of Fisheries.

"The government must revoke that section as it limits our right to work, restricting us to just 5% of the seas," he said. "The fact is that traditional fishermen constitute 80% of the industry."

But the law is not so black-and-white, according to Prathet Sorrak, director of the fisheries department's legal division.

He said certain kinds of fishing boats are not heavily restricted as the chief aim of the law is to put a limit on the kind and number of tools used by local fishermen. The department will meet local fishermen on July 29 to discuss the matter in more detail, he added.