After opening the case and testifying against the 'big fish' in human trafficking in 2015 (above), including high-ranking military officers, Pol Maj Gen Paween got death threats and fled to Australia - where he plans to stay. (Bangkok Post file photo)

The former lead investigator into the Rohingya smuggling case who fled the country after claiming he had received death threats is looking to remain in Australia and is seeking to acquire citizenship, one of his friends says.

Pol Maj Gen Paween Pongsirin still believes it is too dangerous to return to Thailand despite the Criminal Court convictions on Wednesday of 62 out of 103 defendants for trafficking Rohingya migrants, he said. 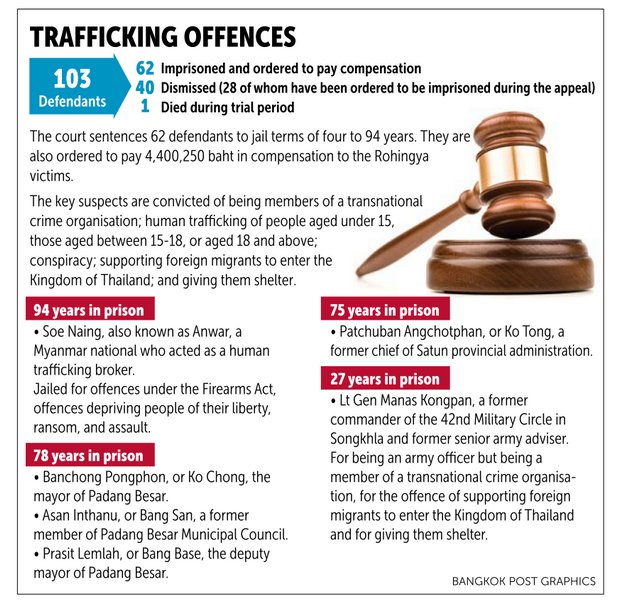 Pol Maj Gen Paween now holds refugee status in Australia and is applying for a protection visa, said the friend on condition of anonymity.

The visa will be used in obtaining Australian nationality which will take about four years.

The friend said the former policeman was had been contacted by several media outlets following this week's convictions.

Pol Maj Gen Paween declined to give any interviews, saying it could affect his visa application. Australian authorities also warned him not to talk about the case.

The friend said there was little chance of Pol Maj Gen Paween returning to Thailand since his investigation uncovered a number of high-ranking and local state officials involved in human trafficking syndicates.

Many of the defendants involved in the court case worked for these officials, he said.

The former police officer does not hold out much hope these officials will ever be identified, he added.

Pol Maj Gen Paween, who initially led the high-profile human trafficking case, quit the Royal Thai Police in late 2015 after he was transferred to the restive far South.

He claimed he could be at risk of retribution from trafficking gangs.

The ex-investigator later fled to Australia and told the media there he feared for his life after his investigation implicated influential people who wanted to silence him.

He said at the time he was too afraid to return home and planned to seek political asylum.