Storm Sonca set to soak most of Thailand
Thailand
General

Storm Sonca set to soak most of Thailand

Officials increase the discharge rate of the Lampao dam in Kalasin province on Monday to prepare for more water from storm Sonca. (Photo by Yongyuth Pupuangpet)

The Meteorological Department has warned that the incoming tropical storm Sonca will bring heavy rain to most parts of the country from Tuesday to Friday.

It reported that the storm was about 350 kilometres east of Vinh, Vietnam, on Monday morning, with winds of about 65 kilometres an hour near its centre.

The storm was slowly moving west and was expected to make landfall in Vietnam on Tuesday. It is then expected to become a depression before entering Laos, the upper Northeast and the North. 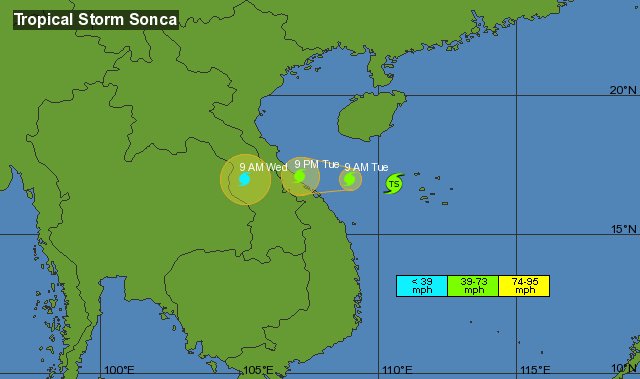 In the Northeast, downpours are predicted in Loei, Nong Bua Lam Phu, Chaiyaphum and Nakhon Ratchasima.

In the East, heavy rain is forecast in Chon Buri, Rayong, Chanthaburi and Trat.

The Meteorological Department warned that flooding is a serious possibility.

Suchart Charoensri, irrigation director in the central plain province of Chai Nat, said that water dumped by Sonca would reach the Chao Phraya river basin next week, and the Chao Phraya dam in Chai Nat was discharging more water to offset the storm's impact.

The faster discharge would raise the level of the Chao Phraya River downstream in Ang Thong and Ayutthaya province by 15-25 centimetres, he said

In the northeastern province of Nakhon Phanom, local authorities warned residents of possible flooding from the Mekong River, which was rising 20-30cm a day. The level stood at 10 metres on Monday while its overflow level is at 13 metres.

In Kalasin province, also in the Northeast, governor Suwit Khamdee said irrigation officials had increased the discharge rate at the Lampao dam to prepare its reservoir to cope with the impact of storm Sonca.