Vehicles parked at the Hop Inn hotel in Muang district of Sakon Nakhon are submerged after floods hit the province on Thursday. (Photo from @K5_Rescue Twitter account)

Sakon Nakhon has been severely damaged by floods, with many areas - including the municipality and its airport - pounded by heavy rain since the early hours of Friday.

The water level continued to rise in Muang and other districts of the northeastern province, cutting off several villages from the outside world.

The airport was forced to close until 3pm on Saturday after a runway was submerged on Friday afternoon, with all flights cancelled.

Airports Department director-general Darun Saengchai said the water level on the runway was about 40 centimetres high, and deemed too dangerous for aircraft. The department will assess the situation day by day before reopening the airport, he added.

The water level in some areas of the municipality reached up to one metre high, and flooding stranded more than 60 people at the Hop Inn budget hotel in Muang district.

Rescue workers are helping the stranded people by supplying them with food before evacuating them for higher ground. About 100 people were taken to makeshift shelters set up near the provincial hall, according to the provincial office of the Disaster Prevention and Mitigation Department.

Sakon Nakhon governor Witthaya Chanchalong called the flooding in the province the worst in 20 years, and said the crisis was exacerbated by runoff from Phupan mountain. 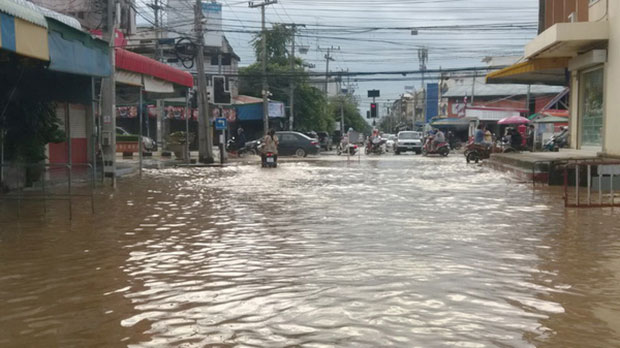 Sukhothai province was also ravaged by floods after the Yom River burst its banks, dumping water into Sri Samrong and Muang districts on Thursday night. Officials were putting up barriers to prevent more water flowing into the district towns.

The Meteorological Department warned that Sakon Nakhon and Sukhothai were among 25 provinces - largely in the northern and northeastern regions - braced for downpours and possible flash floods later Friday, even though storm Songa is losing steam.

The Disaster Prevention and Mitigation Department on Friday ordered officials in 16 provinces to closely monitor the weather and prepare mobile units to help people in case of emergency.

Flood and rain in Muang district of Sakon Nakhon.