Houses and farmland in Nakhon Phanom's Wang Yang district are flooded as a huge volume of water continues to flow into the province from neighbouring Sakon Nakhon. (Photo by Pattanapong Sripiachai)

Five districts were declared disaster zones in Nakhon Phanom after more than 100,000 rai of farmland was swamped by overflow from the Nam Kam River, swollen by continuing runoff from neighbouring Sakon Nakhon.

Authorities said the situation in areas of Nakhon Phanom province was critical.

A massive volume of floodwater from Sakon Nakhon had flowed into Lake Nong Narn, the largest in the Northeast, before entering the Nam Kam River, a major tributary of the Mekong River.

The five districts were declared disaster zones so assistance could be urgently provided.

Wang Yang and Na Kae were the worst hit, as they adjoin the Nam Kam River. In Na Kae, more than 400 households in 60 villages were affected. Some 75,000 rai of farmland were damaged.

In Wang Yang, four tambons were submerged and more than 300 households affected. Almost 5,000 rai of farmland in the district were damaged by what locals said was the worst flooding in the district for at least 40 years.

The water at Ban Nakham village was 2 metres deep. Residents fled to safer areas as the level kept rising.

Uthen Cheuboribun, 62, of  Ban Nakham, said the flooding was the worst since 1974. The water had risen rapidly, rushing through communities and fields.

In Sakon Nakhon, the water was 70-80cm in Muang district. Several main roads in the downtown area were impassable.  Boats were the only means of transport.

Soldiers and police were sent to make night patrols in the business zone to prevent looting.

Three districts  - Phon Na Kaeo, Khok Si Suphan and Wanon Niwat - were cut off from the outside world by land. (continues below) 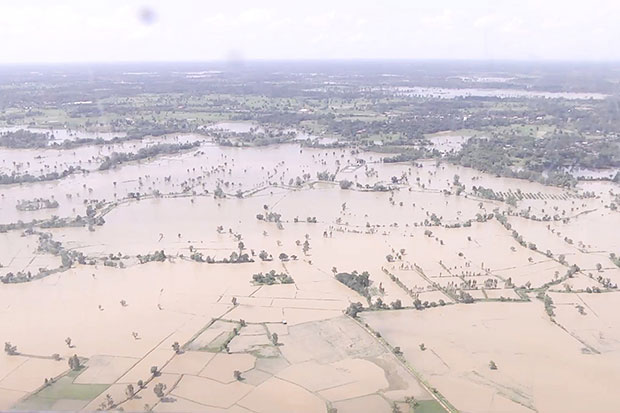 The 23rd border patrol police sub-division on Tuesday sent a helicopter to deliver relief items to areas in Wanon Niwat district, which has been ravaged by floods since Friday.

Ban Thayiem resident Ponglada Thepprasit, 57, said floodwater forcd its way into her house around 5am on July 28. Her family managed to salvage only one car and some essential documents. She had never seen such flooding in the area before.

In Khon Kaen province, more than 10,000 rai of paddy fields in Muang and Nam Phong districts were inundated after the Nam Phong River topped its banks, overflowing into many villages in the two districts.

Khon Kaen governor Pongsak Preechawit said flat-bottomed boats were dispatched to help victims in Nam Phong district as roads were impassable for vehicles. Nam Phong was the first area to be hit after the Ubolratana dam released water.

The water level at Ubolratnana dam stood at 1,466 million cubic metres, or 50% of its holding capacity, on Tuesday. About 65.50 million cu/m was flowing into the dam each day.

The dam was releasing 16.05 million cu/m a day to cope with the huge inflow.

In Phichit, 237 flood-hit villages in 12 districts were declared disaster zones.

Governor Veerasak Vijitsaengsri signed the order on Tuesday. A total of 98,536 rai of farmland, 9 fish ponds and 58 roads were damaged by the flooding that affected 1,707 households. The Yom River was still rising. 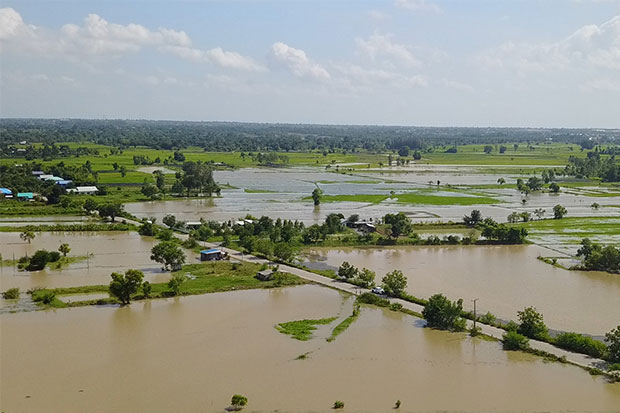