Rescue workers extract the victims from the crumpled wreckage of the Nissan March after it collided with a passenger van in Kalasin's Muang district on Monday night. (Photo by Yongyut Phupuangphet)

KALASIN - Four people returning home after attending funeral rites were killed and five other people hurt when a car and passenger van crashed head-on in Muang district on Monday night.

Rescuers found three men dead inside the wreckage of a black Nissan March car with Kalasin licence plates and a smashed up front end. Two other people in the vehicle, a man and a woman, were seriously hurt and were rushed to Kalasin Hospital, where the man was later pronounced dead. 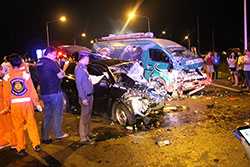 Police and rescuers at the scene of the crash in Kalasin's Muang district on Monday night. (Photo by Yongyut Phpuangphet

Next to the wreckage of the car, a van with Bangkok licence plates was stalled on the road with extensive damage to the front.  Four people inside the van were given first aid and rushed to a hospital.

Van driver Somchai Premproy, 35, told police he was taking six passengers from Kamalasai district to downtown Muang district when the car, travelling in the opposite direction, suddenly swerved out of its lane and crashed head-on into his van.

Police investigators said the car was carrying mourners home to Kamalasai district after they attended funeral rites in the downtown area.