A 26-year-old man who allegedly stole a pistol from a shooting range and shot dead his father in Lop Buri on Monday, lies on the ground, shot and wounded during an exchange of gunfire with police in neighbouring Sing Buri district on Tuesday morning. (Photo taken from Siang Thong Thin (local voice) Facebook page)

LOP BURI - The hunt for a 26-year-old man, a reputed drug addict, who stole a pistol from a shooting range and shot dead his father on Monday ended abruptly in neighbouring Sing Buri province on Tuesday morning, when he was shot by police.

Police had tracked Surachai Chaiyanant to a resort in In Buri district, where he was hiding, according to media reports.

When they moved in to arrest him the suspect allegedly resisted and opened fire at them. Police returned fire, Mr Surachai was seriously wounded and rushed to a nearby hospital.

According to  news reports, the suspect headed to Sing Buri after killing his father in Lop Buri because he wanted to shoot his mother, who was staying there. Police moved her to a safer area after tracking him there.

Sgt Maj 1st Class Chaiyot Chainayant, 54, was found shot dead at his residence at the Ordnance Depot in Lop Buri's tambon Khao Phra Ngam by police called to the scene about 3.30pm on Monday. A 9mm pistol and three spent cartridges were nearby.

He was believed to have been killed by his son Surachai, who is reportedly a drug addict.  Mr Surachai had allegedly earlier threatened to kill everyone in the family, including his mother. This caused his mother, his wife and his child to flee the house and move into a hotel two days ago, Thai media reported on Tuesday.

Only Sgt Maj 1st Class Chaiyot stayed with his son at the house. Mr Surachai allgedly stole a Glock 17 and 50 bullets from the Por Pibulsongkram shooting range. He then fled on a motorcycle to his house, pursued by soldiers and police.

The suspect took refuge on the second floor. His father was asked to help to lure him downstairs to eat a meal laced with sleeping pills. When the father called his son downstairs to eat, Mr Surachai replied he had already eaten. He then allegedly went downstairs, then pulled out a pistol and shot his father before again fleeing on his bike.

They were warned to take extra caution because the suspect was known to be armed. If Mr Surachai resisted arrest and opened fire, police were told to take decisive action. 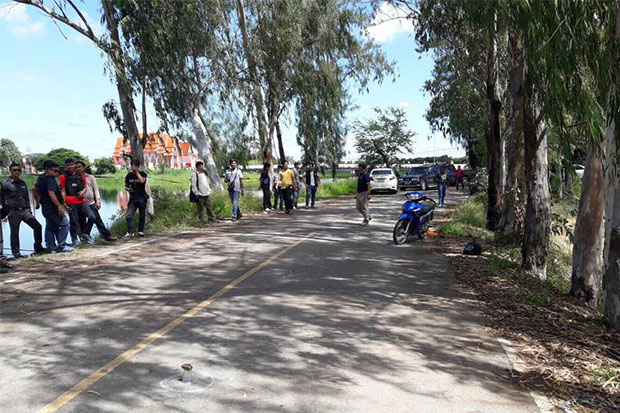 Police at the scene of the clash with a suspect who allegedly shot dead his father in Lop Buri before he was shot and wounded in Sing Buri during an exchange of gunfire with police hunting down him. (Photo taken from Siang Thong Thin (local voice), Facebook page)

There were 22 more Covid-19 fatalities and 3,058 new cases in the country over the past 24 hours, the Public Health Ministry reported on Friday morning.

WASHINGTON: The World Bank rejected a request from El Salvador for assistance in its bid to adopt bitcoin as a currency, a spokesperson for the Washington-based development lender said Thursday.