Deputy Prime Minister Prawit Wongsuwon does not expect recent clashes in Myanmar's Rakhine state to cause an influx of Rohingya Muslims into Thailand. However, authorities have been instructed to prepare for the worst. 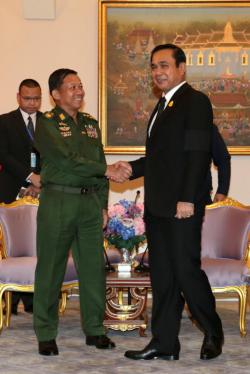 Gen Prawit, also defence minister, was speaking yesterday about whether the confrontation between Myanmar authorities and Rohingya militants will ease. Earlier, he met Myanmar's Supreme Commander Min Aung Hlaing during his visit to Thailand to attend the Thai-Myanmar High-Level Committee (HLC) meeting.

Gen Min Aung Hlaing "insisted they can cope with the situation", Gen Prawit said. According to media reports, at least 109 people, mainly militant suspects, have been killed during the clashes.

The supreme commander said Nay Pyi Taw is stepping up legal measures to deal with the latest violence and will work with its Thai counterparts to build a "peaceful atmosphere" along the border, defence spokesman Kongcheep Tantravanich also quoted Gen Min Aung Hlaing as saying.

In the view of Gen Prawit, one reason Thailand is unlikely to suffer an impact from the unrest is the remoteness of Rakhine state where the clashes erupted. The state is situated in the northwest of Myanmar.

Given Myanmar's attempts to prevent the clashes from escalating, the deputy prime minister does not believe Rohingya Muslims will be forced to travel by sea to Thailand. Though Gen Prawit played down the situation, Thai authorities have been told to brace for a scenario in which displaced Rohingya migrants enter Thailand.

"If we don't make any preparations, what if it [the displacement] occurs?" Prime Minister Prayut Chan-o-cha said before his meeting with Gen Min Aung Hlaing yesterday.

Thailand adheres to humanitarian principles in giving help to displaced people and refugees, but once problems in their countries ease, they must return to their homes, Gen Prayut said.

Thailand is often viewed as a transit point by Rohingya migrants before they travel on to third countries. The ethnic minority group will be given help while taking refuge here, but "they are not allowed to stay in the country", Gen Prawit said.

The government has gradually sent back ethnic minority groups that were displaced by internal conflicts to Myanmar. According to officials, the first batch of 71 people returned to their homes in October last year and a following group of 247 people will follow suit.

The meeting was aimed at boosting cooperation between the two countries over various issues including drug operations and the treatment of refugees from Myanmar. Thailand has kept a close watch on Rohingya migrants after it launched a crackdown on human trafficking gangs which were exploiting the displaced Muslims.

According to media reports, the previous round of insurgent attacks in Rakhine last October drew a harsh military response which displaced up to 87,000 Rohingya.