The truck driver told police he had bent down to pick up something that had fallen on the floor.

The crash occurred between kilometre markers 157-158 on Highway 340 in tambon Chai Nat, and was reported about 7.30am, Muang district police said.

Rescue workers said 11 students were injured, three of them badly hurt.  They were rushed to two nearby hospitals.  Twenty other students suffered minor bruising. Many were still upset and crying when emergency services arrived. Parents rushed to the scene after hearing of the crash.

Bus driver Apirak Panthee, 30, told police he was taking 45 students to schools in the downtown area. The  bus was parked on the roadside, waiting for another group of students, the truck ran into it from behind.

Truck driver Prasut Luangsorn, 43, told police he was delivering animal feed to Phichit. Just before the crash he had bent down to pick up an object that had fallen down inside his vehicle. When he raised his head he was shocked to see the school bus looming immediately ahead of him. He could not brake in time to avoid hitting it.

Police detained the two drivers for questioning. They were investigating. 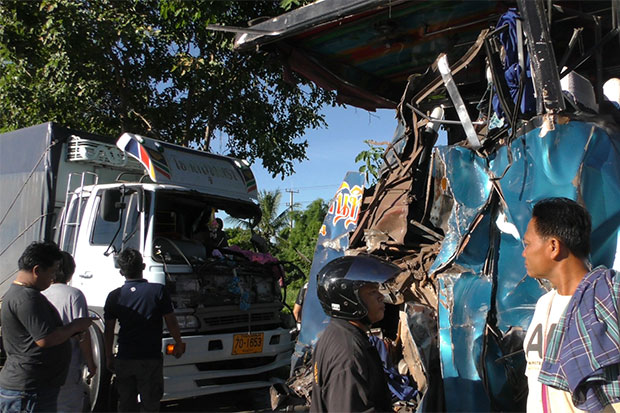 Police examine the front of the truck and rear of the school bus it crashed into in Muang district, Chai Nat, on Friday morning. (Photo by Chudate Seehawong) 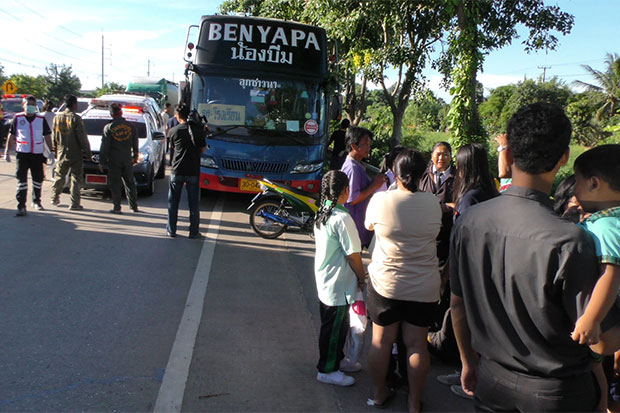 Parents hug and calm their children at the scene of the accident. (Photo by Chudate Seehawong)