Students at Sukhanaree School in Nakhon Ratchasima who suffered diarrhea and vomiting receive treatment on Tuesday morning. All had eaten chicken served after a police seminar against drug abuse on Monday.

NAKHON RATCHASIMA - Forty-six primary school students fell sick after eating khao man kai at the conclusion of a class against drug abuse organised by police in Muang district on Monday.

Rescue workers and medics were called to Sukhanaree School around 9.30am on Tuesaday, being informed that many students had suffered acute diarrhea and vomiting overnight.

Ms Sri-arun said she also suffered diarrhea that night, but was not certain what caused it until parents notified the school’s Line group on Tuesday morning that their children had suffered diarrhea and vomiting. All had attended the special activity and had eaten the chicken.

Veeraphat Somprasong, 11, said she had to go to the toilet eight times. She vomited and still felt chest pain this morning.

Kheetaphat Khotjangreed, 10, said she also had the runs, and believed it was food poisoning.

Medical staff provided treatment for 46 sick children at the school. Two girls were taken to hospital as they suffered dehydration and heart palpitations.

The school asked authorities to track down the cause.

Nisapa Kaewplee, a public health official at Muang municipality, said that police organising the event had ordered 130 boxes of khao man kai from a shop in the downtown area on Monday morning.

The food was delivered in boxes about 1.30pm and distributed to students after the event. Many students took it back to school with them to eat later.

The weather was hot and the food had been prepared in the morning, she said. This was probably the cause of the problem. Samples had been collected for testing. 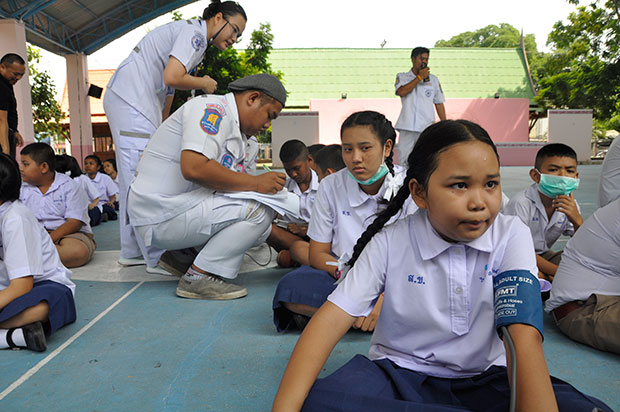 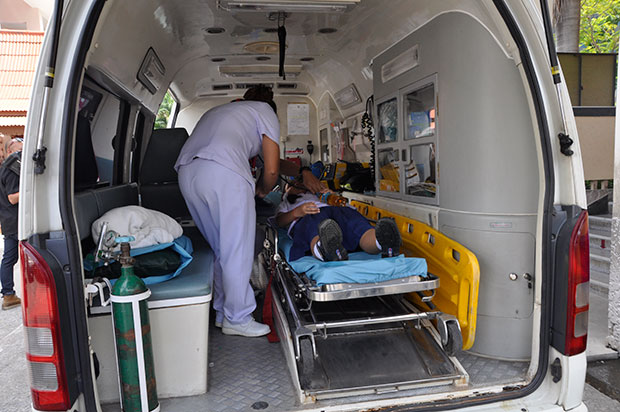 A nurse gives first aid to a schoolgirl who develops acute diarrhea and vomiting. (Photo by Prasit Tangprasert)