A Brazillian has been arrested at Suvarnabhumi airport after trying to smuggle more than one kilogrammes of heroin inside his stomach. Paulo Nascimento is taken to release the heroin at Suvarnabhumi airport on Wednesday.

Police and customs authorities detained Paulo Nascimento on Wednesday night and took him for an x-ray after the 27-year-old collected his luggage from the conveyor belt at the airport.

Sommai Kongwisaisuk, the Narcotics Suppression Bureau (NSB) commander, said on Sunday the x-ray found 100 capsules of the drug weighing around 1.3kg in the stomach of the visitor, who came to Bangkok from Brazil via Addis Ababa on Ethiopian Airlines flight ET618.

The arrest followed a tip-off that a man from Brazil was trying to sneak heroin into the country, he added.

Pol Lt Gen Sommai said Mr Nascimento decided to cooperate with police by telling authorities that once he expelled it from his body, another man would take delivery of the drug at a hotel in Sukhumvit area.

He was allowed to go ahead with the plan, and a man identified as Elsonias Da Silva contacted him at the hotel on Friday.

Police arrested Mr Da Silva, 35, after he went to the room to collect the heroin, the NSB chief said. 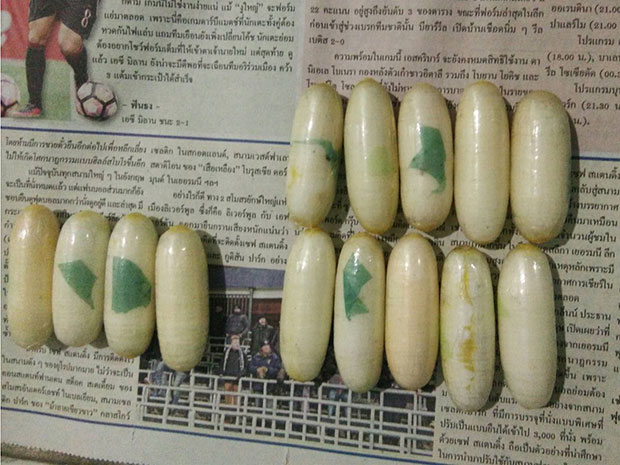 Heroin weighing 1.3 kilogrammes is shown after being expelled from Paulo Nascimento's stomach.