Deputy Prime Minister Somkid Jatusripitak displays the front page of a special publication of the Bangkok Post at a symposium on Thailand 4.0 held at Bangkok Marriott Marquis Queen's Park on Tuesday. (Photo by Pawat Laopaisarntaksin)

Thailand will remain a key player for Japanese investors with more investment likely to flow into the country in the near future, Hiroshige Seko, Japan's Minister of Economy, Trade and Industry says.

"Thailand has emerged as the most important supply chain for many Japanese industries such as automobiles and this is evident from the fact that today Thailand is producing a similar number of vehicles as Japan," Mr Seko said in an exclusive talk with the Bangkok Post.

Mr Seko, who is in Thailand with representatives from as many as 570 Japanese firms on a three-day visit at the invitation of Deputy Prime Minister Somkid Jatusripitak and his economic team, said most investors who have joined the delegation have shown a great deal of interest in investing in Thailand.

"I had dinner with those who came with me and these investors are very optimistic about Thailand and its potential. Tomorrow these investors will visit the Japanese factories near the EEC [Eastern Economic Corridor] area and this will further cement their faith in Thailand's potential," Mr Seko said.

The Japanese delegation, he said, has gained a lot of faith from this visit as it has helped would-be investors see how committed the country is to welcoming Japanese investment. Although he cannot give exact figures on how many deals could be expected, he has instructed the Japanese External Trade Organisation (JETRO) to follow up the matter.

He said JETRO would try to handle any problems investors might have, and that Deputy PM Somkid assured him and the delegation that if JETRO cannot handle those problems, it can come directly to him or Industry Minister Uttama Savanayana.

"First-time investors in Thailand may face some problems and it is the job of JETRO to help them out and if JETRO is unable to handle the issue, we have been asked to go directly to the ministers.

"But the first aim is to get rid of any obstacles for these Japanese companies that are looking to invest," Mr Seko added.

For those companies that have already invested in the country, Mr Seko said they are likely to raise their investment levels, especially in the EEC.

The Prayut Chan-o-cha government has devised the EEC model as its key economic platform in which it is looking to develop the EEC into a series of new economic zones featuring upgraded technology based on an estimated 600 billion baht infrastructure investment plan.

Technology-based companies were the focus of this delegation and Mr Seko admitted that a bulk of the nearly 600 investors from Japan were in the information technology field.

IT, he said, was going to be the future of everything from the automotive to other manufacturing sectors.

Citing the automotive sector as an example, he said the current trend was to go on to electronic vehicles which will then shift to fuel cell vehicles (FCV).

"Changes in the production line so they use more IT is becoming important these days, and these businessmen see a lot of business opportunities in Thailand in this area," Mr Seko said.

Mr Seko said that there are few issues the delegation is concerned about as they have seen how Japanese companies have prospered in Thailand.

As far as incentives go, he said what Thailand offers that other Asean countries do not is that "they have far less obstacles in doing business". 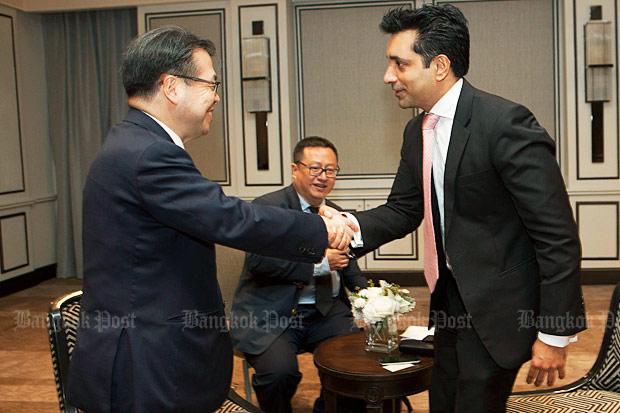