Motorcyclists wade through floodwaters in Patong area of Phuket on Friday after heavy rain. (Photo by Preecha Ritthirtree)

Phuket was flooded on Friday after an overnight downpour soaked the resort island, with heavy rain expected in most parts of the country this weekend.

Several roads in Muang district in Phuket, including the popular old town, were submerged on Friday morning. Floodwater made some roads in Patong area impassible for small vehicles. 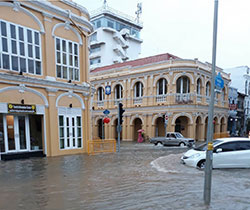 The old town of Phuket was flooded on Friday. (Photo by Achadtaya Cheunnirun)

Prapun Khnphrasaeng, the disaster prevention and mitigation office in Phuket, said the flooding was due to heavy rain. Landslides were reported in four locations on the island, including bungalows under construction at The Sea Villa Kamala, the disaster official added.

Phet Chancharoen, the Phuket airport general manager, said poor visibility due to the rain had delayed some flights to the island on Friday morning. Thai AirAsia flight FD3037 from Bangkok diverted to Krabi airport and then returned to land in Phuket after visibility improved.

Some areas remain flooded on Friday afternoon, according to FM91 Traffic Police radio.

Phuket and most other parts of the country are being warned to brace for more heavy rain as Typhoon Doksuri is moving across Vietnam towards Thailand. It is expected to be downgraded to a tropical depression before it passes through the northeastern and northern regions, starting with Nakhon Phanom. 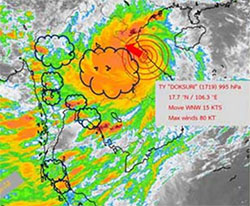 The position of Typhoon Doksuri as of 3pm on Friday. (Meteorological Department photo)

The typhoon hit Vietnam on Friday.

The Meteorological Department on Friday issued a  warning for 49 provinces - including Phuket, Surat Thani, Chiang Mai and Bangkok -  saying stormy conditions would continue well into Saturday.

"The northern and northeastern regions will see heavy rains and strong winds in several areas," the department said.