A fugitive daughter of jailed rice trader Apichart "Sia Piang" Chansakulporn was sentenced in absentia Wednesday to four years in prison for her role in fake government-to-government (G-to-G) rice sales. 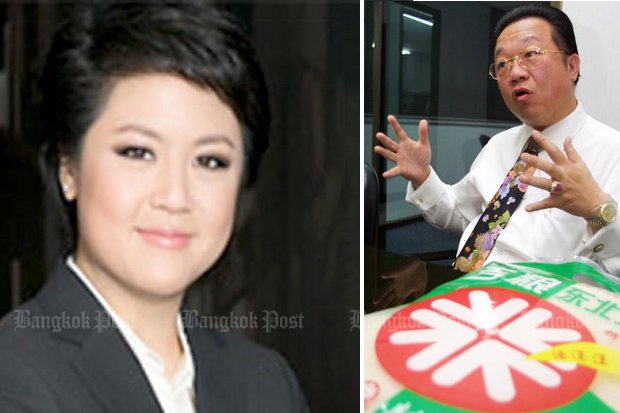 Thanyaporn Chansakulporn, daughter of prominent rice trader Apichart aka Sia Piang, is on the wanted list after failing to show at the Supreme Court Wednesday to hear the verdict that sentenced her to four years in prison. (File photos)

Thanyaporn, the 21st defendant in the case, was also ordered to jointly pay 1.29 billion baht in compensation to the state, along with Khita Properties Co, the 20th defendant, and fined 40,000 baht.

A warrant for her arrest was issued after she failed to appear to hear the judgement in the rice deal case on Aug 25, and the reading of the judgement was postponed.

The court passed sentence and formally issued a second arrest warrant Wednesday, ordering that she be brought back to serve the prison term.

The court on Aug 25 sentenced her father, Apichart, an executive of rice exporter Siam Indica Co Ltd, to 48 years in prison in the same case, and ordered he pay 16.9 billion baht to the Finance Ministry for the damage.

Former commerce minister Boonsong Teriyapirom was sentenced to 42 years in jail and his former deputy Poom Sarapol to 36 years. Their requests for bail pending appeal were denied.

Other defendants also received jail terms and had to pay damages in proportion to their crimes as well.

Eight of the 28 defendants were acquitted. Two of them failed to appear.