About 7,500 pre-screened people will be permitted to attend the royal cremation ground at Sanam Luang and drones will be banned from the area during the royal funeral ceremonies for the late King Bhumibol Adulyadej at the end of this month.

Security measures will continue to be beefed up to ensure the Oct 25-29 ceremonies go without a hitch, officials said. 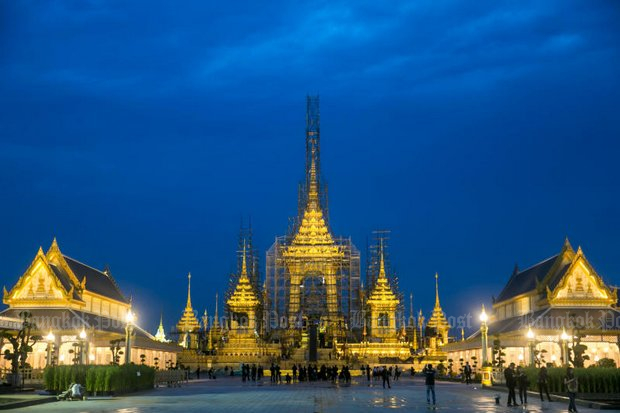 The Royal Crematorium construction is rapidly taking shape at Sanam Luang for the funeral of the late King Bhumibol on Oct 25-29. (Photo by Seksan Rojjanametakun

Deputy Prime Minister Prawit Wongsuwon said Tuesday that 50,000 officers from the Interior Ministry, the Defence Ministry and the Royal Thai Police as well as security volunteers will be on hand, both at the main ceremonies at Sanam Luang in Bangkok and at replicas of the royal crematorium in 76 provinces.

On Oct 26, when the royal cremation ceremony takes place, only 7,500 people with verified credentials will be allowed to enter the Sanam Luang area. Others will have to observe the ceremony from replicas of the royal crematorium, of which there are nine in Bangkok, as well as from temples and other designated areas, he said.

Deputy Prime Minister Wissanu Krea-ngam said earlier those who are allowed to attend the main ceremony at Sanam Luang are mostly state guests and officials who are participating in the royal processions.

Gen Prawit echoed his previous concern about the threat posed by ill-intentioned groups both inside and outside the country that may attempt to disrupt the royal cremation ceremonies.

Thai authorities know of several groups in several countries comprising Thai nationals and foreigners that have already begun galvanising their supporters via radio and Facebook, he said.

Members of the public who obtain any information about them or details of any suspicious activity are encouraged to call a 24-hour hotline by dialling 1441 to alert the authorities, he added.

Prime Minister Prayut Chan-o-cha, who also serves as chief of the National Council for Peace and Order (NCPO), has instructed Gen Prawit to ensure all security intelligence units are working hand in hand ahead of the royal cremation ceremonies, an informed source said on Monday.

Deputy national police chief Srivara Ransibrahmanakul said that although the police have not detected any concrete plots to stir up trouble they are monitoring all suspicious groups.

Meanwhile, the Civil Aviation Authority of Thailand (CAAT) declared a no-fly zone for all drones in Bangkok during the period. Those will special permission will be exempt, it said. 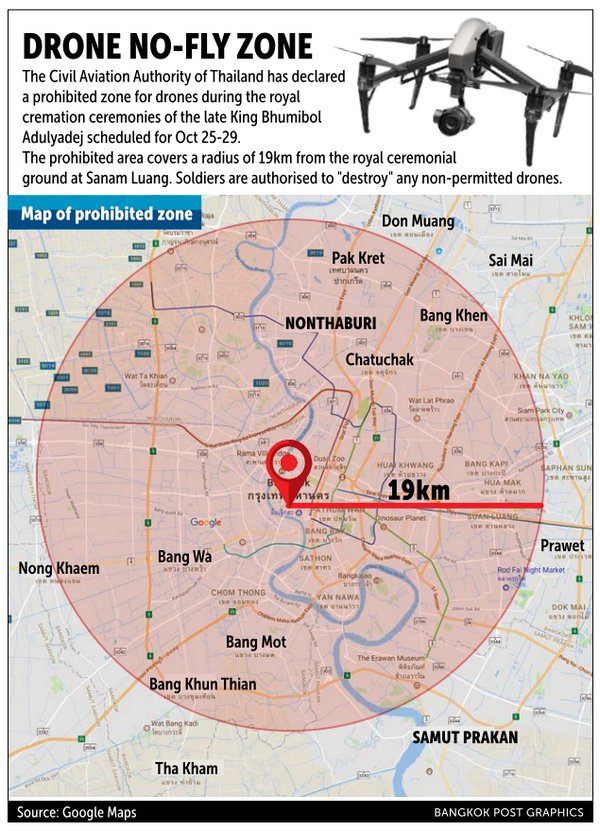 The vast majority will be prohibited from flying within a 19km radius of the Grand Palace and Sanam Luang during the royal cremation ceremonies, said CAAT director-general Chula Sukmanop.

Mr Chula said only those commissioned by the Royal Cremation Committee on Ceremonies for aerial photography will be permitted to take off. Others that violate this rule will be "destroyed", he said.

The ban means private drones will not be able to fly in Sathon, Nonthaburi, Bang Wa, Huai Khwang, Lat Phrao and Bang Kapi, among other areas.

Deputy NCPO spokesperson Sirichan Ngathong said army chief and NCPO secretary-general Chalermchai Sitthisad focused discussions at Tuesday's meeting of the NCPO on how it is preparing to support the royal cremation ceremonies.

Gen Chalermchai stressed the importance of scaling up intelligence work, which is seen as a key mechanism to thwart any possible "unwanted incidents" from happening during the occasion, said Col Sirichan.

The ceremony on Oct 26 at Sanam Luang will be attended by the royal family with crowds of up to 250,000 expected.