Commuters wait for the water to recede on a flyover at the Ratchadaphisek-Lat Phrao intersection on Saturday morning. (Photo by Pattarapong Chatpattarasill)

Bangkok people woke up to a waterworld on Saturday after at least 55 major roads were submerged following downpours in the early hours. Two remained flooded as of 3.45pm.

The water ranged from 30cm to thigh-high levels.

Bangkok governor Aswin Kwanmuang apologised to the public in the afternoon and insisted City Hall officials had done everything they could.

“I don’t deny responsibility but the rain exceeded 200mm. The last time that happened was when Maj Gen Chamlong Srimuang was governor,” he said.

Pol Gen Aswin said drainage had been slow because of the large quantity of rainwater although City Hall’s equipment was adequate and fully functional.

Water from the North was coming in at the rate of 2,300 cubic metres per second, still within Bangkok’s capacity of 3,500 cu m/s, he added.

Din Daeng Road between Rama IX and the Pracha Songkhro intersection is still flooded at 3.32pm.

The governor was apparently responding to rumours that northern dams were discharging large volumes through Bangkok, a report the government spokesman dismissed as untrue on Saturday.

Lt Gen Sansern Kaewkamnerd said the information was from 2011 but had been posted in social media again by a Facebook user on Friday.

It claimed water was being discharged from the Bhumibol Dam to the Chao Phraya River through the Saen Saep Canal.

He warned people not to share the misinformation as it could breach the computer crime law.

“The Bhumibol Dam is now at 70% of its capacity so there’s no reason for it to discharge water right now, he said.

Earlier, Jakkaphan Phiewngam, a deputy Bangkok governor, said the Bang Sue, Rama IX and Makkasan water tunnels were working normally and he was convinced the situation should ease soon.

He said 55 spots in Bangkok had been flooded but the hardest hit were the main Ratchadaphisek and Vibhavadi Rangsit roads, causing traffic jams all over the capital. 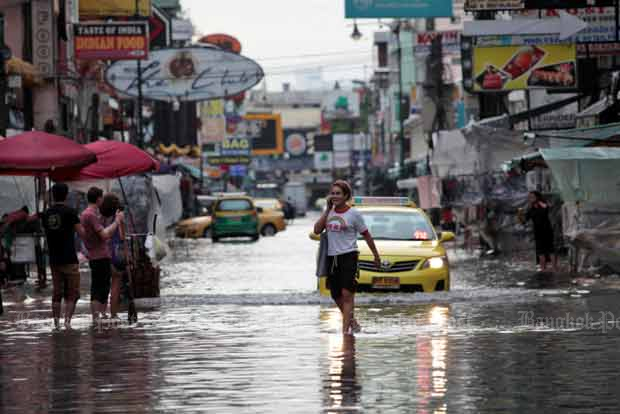 A tourist walks on Khao San Road on Saturday morning after heavy rain on Friday night. (Photo by Chanat Katanyu)

The BMA’s Flood Control Centre posted on its website Saturday morning that from 7am Friday to 7am Saturday, there was medium to heavy rain in many areas.

The most rain was reported in Phra Nakhon district, at 214.5mm, followed by 214mm in Phasi Charoen, 208mm in Khlong Mon of Bangkok Noi district, 195mm in Yannawa, 177.5 at Makkasan in Ratchathewi and 174mm in Din Daeng.

The centre predicted more rain and thunderstorms in 60% of Bangkok and surrounding provinces on Saturday.

Traffic radio and community groups reported in social media about the floods in Bangkok and Samut Prakan.

The Bangkok Flood Control Centre later tweeted that no rain had been predicted in Greater Bangkok as of 10am. 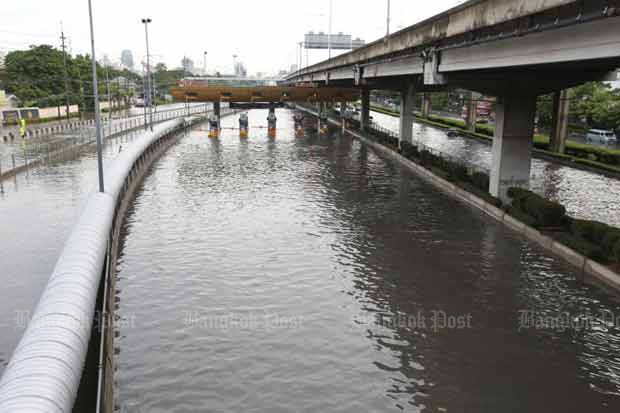 The section near the Suthisan intersection on Vibhavadi Rangsit Road is impassable at 9.53am on Saturday. (Photo by Phrakrit Juntawong) 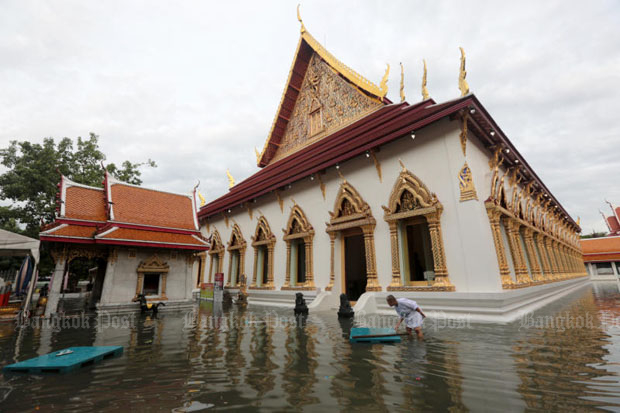 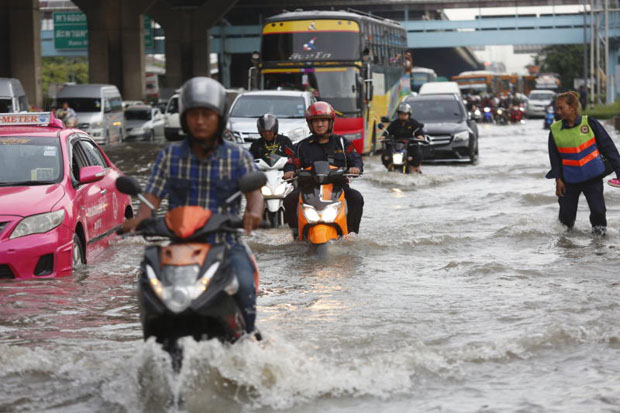 Traffic on Vibhavadi Road at the section between Wat Samian Nari and the Lat Phrao intersection at around 7am. (Photo by Pattarapong Chatpattarasill)

Flooding in the Din Daeng area as of 9.14am. 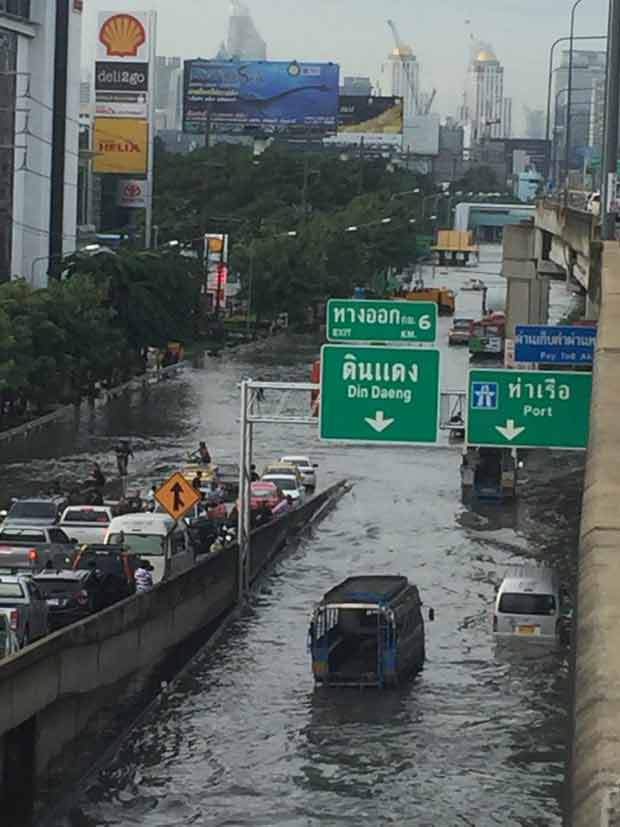 Twitter user @9lnde posts an image via the account of traffic radio station @js100radio showing water in the Din Daeng area as of 9.14am on Saturuday.

Flooding near the Phrom Phong BTS station on Sukhumvit Road as of 8.53am.