Her Royal Highness Princess Maha Chakri Sirindhorn attends the second rehearsal of the procession for the royal funeral of the late King Bhumibol on Sunday. (Photo by Patipat Janthong)

Her Royal Highness Princess Maha Chakri Sirindhorn on Sunday took part in the second rehearsal of the procession for the royal funeral of the late King Bhumibol.

The Princess presided over the rehearsal of the main procession, which started from the Grand Palace and proceeded to the site of the royal cremation ceremonies at Sanam Luang.

The rehearsal covered a distance of 890 metres and included the Royal Chariot of Great Victory, which will be used to carry the body of the late King.

Prime Minister Prayut Chan-o-cha was among dignitaries taking part in the procession. 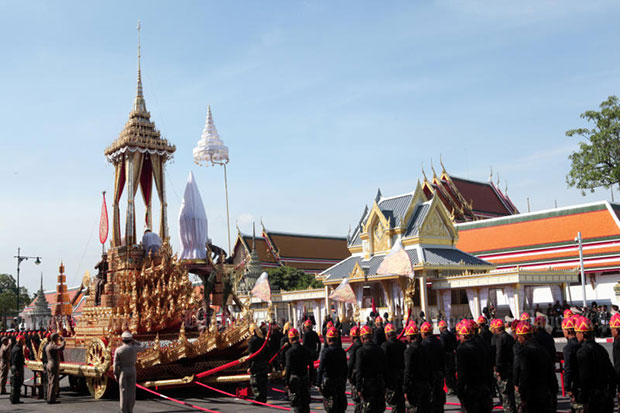 The Royal Chariot of Great Victory is seen during the second rehearsal of the procession for the royal funeral of the late King Bhumibol on Sunday. (Photo by Apichart Jinakul)

Related processions were held later in the day.

People lined the streets as the procession moved along.