Man picks up woman online, then steals her pick-up truck

AYUTTHAYA: A romance that started with an internet pickup line ended when her new boyfriend stole her real-life pickup truck - on the way to 'meet his parents'.

Police captured Apichart Kaewmanee, 28, in Uthai district after an assistant nurse from Chiang Mai lodged a complaint about her missing vehicle on Saturday.

The woman, whose name was withheld, chatted with Mr Apichart for about a week on the Badoo website, according to Uthai police chief Pol Col Anusorn Wayakham.

During the chats, Mr Apichart told her that he wanted to introduce her to his parents, so he took a bus from Ayutthaya to Chiang Mai to meet her.

The two then drove the woman's pickup truck from Chiang Mai back to Ayutthaya on Saturday. When they stopped for a meal in the district, Mr Apichart drove the vehicle away, leaving the woman inside the restaurant, the police said.

Police found the vehicle on Saturday night  - being driven by another man who said he had bought it from Mr Apichart.

Police ordered the man to ask Mr Apichart to come back to see the vehicle. He was then arrested. 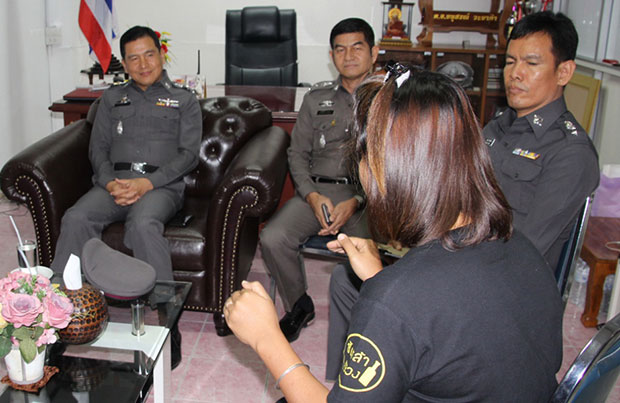 An assistant nurse gives Uthai police her account of how she met Apichart Kaewmanee. (Photo by Soonthorn Phongpao)