McThai, the operator of the McDonald’s fast food chain in Thailand, has apologised after a customer found cockroach legs floating in a cup of coffee at an outlet on Rama IV Road in Bangkok’s Klong Toey district.

On its Facebook page, McThai posted a letter of explanation.

According to the letter, the manager of the outlet had apologised to the customer after learning about the incident. Counter staff immediately provided a fresh cup of coffee to the customer. 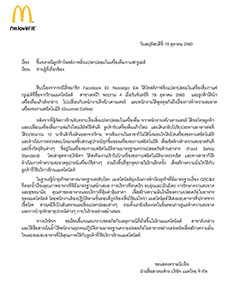 The letter from McThai, operator of McDonald's fast food chain in Thailand, explaining away the cockroach legs a found floating in a customer's coffee. (Photo taken from @McThai Facebook page)

Staff at the outlet had not ignored the problem. They had opened the coffee maker and checked and cleaned it in line with the company’s food safety standards. The company later took away the coffee maker for inspection.

A Facebook post by “Nostalgic Eik” went viral online after he wrote about his shocking experience at McDonald’s outlet,Tesco Rama IV store on Oct 16.  He noticed dead cockroach remains floating in his coffee just as he was about to sip it.

“I initially thought the cockroach legs might have been in the cup before the coffee was poured in. I told a staffer there and I was given a new cup of coffee. But it seemed that the problem remained as I heard the staffer ask a colleague whether the coffee maker was washed or not. I felt bad when I heard that,’’ the Facebook user wrote.

The post was shared online and drew comments from many netizens criticising food safety at the fast-food chain.