A woman holds the hand of a boy as they wade through floodwater at their house alongside the Tha Chin River in Wat Sing district of Chai Nat. Their community was flooded after water behind the Chao Phraya Dam was diverted to alleviate the hardship of flood-hit people living downstream and upstream from the dam. (Photo by Chudate Seehawong)

CHAI NAT: The Royal Irrigation Department on Monday began redirecting water from the rising Chao Phraya Dam reservoir into the Tha Chin River to ease the hardship of people living in downstream areas that are already flooded.

However, this caused  the Tha Chin River to overflow, inundating at least 50 houses along the river in Wat Sing district of this Central Plain province.

Residents raced against time to evacuate their belongings to higher areas as the water in their houses was over 50cm deep and still rising.

Downstream from the dam, the flooding continued.

In Supphaya district of Chai Nat, more than 2,800 houses in seven tambons -- Supphaya, Bang Luang, Khao Kaew, Taluk, Had Arsa, Phornang Dam-ok and Phornang Dam-tok - have been inundated for 16 days.  More than 700 households have been evacuated and the families are living in temporary shelters erected along roads on higher ground.

The flooding has ruined crops on more than 16,000 rai of fields in the seven tambons.

Residents of households upstream from the dam, in Muang and Manorom districts, also began evacuating to shelters on roads as the water level in the reservoir rose another 10 centimetres to 17.44 metres above mean sea level on Monday.

Irrigation authorities have attempted to eased the suffering of communities both downstream and upstream  by diverting the flood surge from the north into canals on both sides of the Chao Phraya River. Water was being pushed to Suphan Buri and Nakhon Pathom, from where it would  flow into the sea in Samut Sakhon, without passing through already flooded areas in the Central Plain and Bangkok.

The Chao Phraya Dam continued to discharge water at 2,598 cubic metres of water per second on Monday, for the ninth consecutive day. 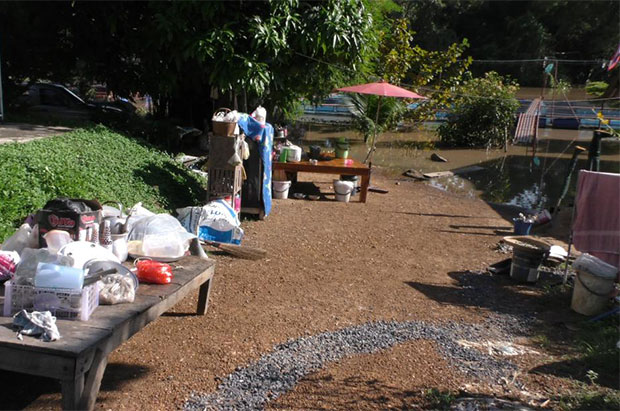 Households in Chai Nat move their belongings to safety on a dry road. (Photo by Chudate Seehawong)