In a national outpouring of grief, Thais across the country turned up late on Thursday night to bid a tearful and final farewell to their beloved King Bhumibol Adulyadej in solemn, centuries-old royal ceremonies.

At 10pm, His Majesty King Maha Vajiralongkorn Bodindradebayavarangkun presided over the royal cremation for the late King at the royal crematorium at the Sanam Luang ceremonial ground.

Smoke rose from the crematorium at 11.30pm Thursday, signifying that the last voyage of the late King had begun. 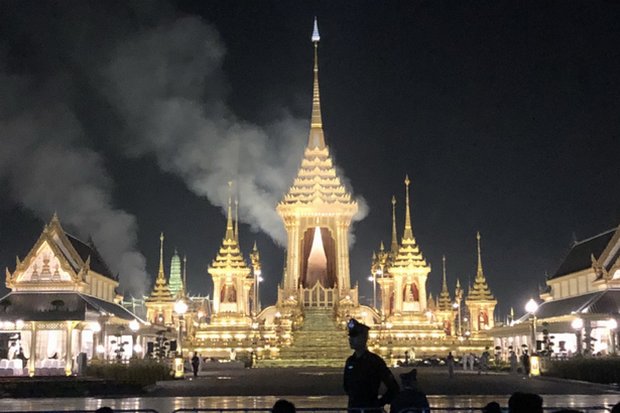 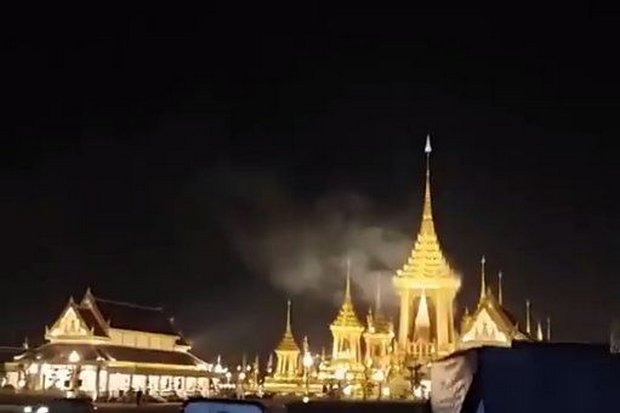 His Majesty also presided over a royal cremation ceremony at 5pm. The ceremony at this stage was meant to be symbolic, only involving the laying of cremation flowers at the royal urn.

The melancholic moment resulted in many Thais becoming inconsolable and breaking down in tears. 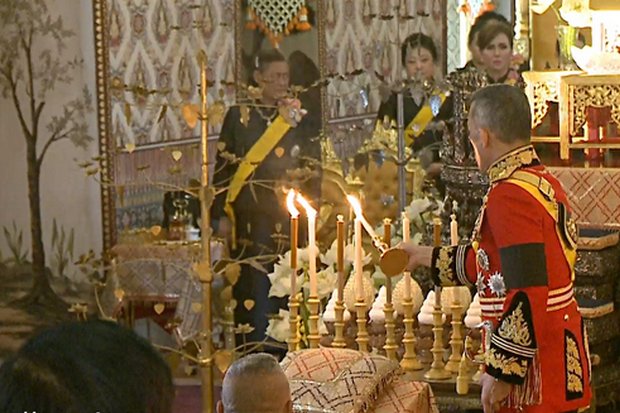 His Majesty King Maha Vajiralongkorn Bodindradebayavarangkun begins the ceremony for the royal cremation. In the background are Her Royal Highness Maha Chakri Sirindhorn and Princess Ubolratana, also children of the late King. (Screen grab ThaiPBS)

His Majesty the King will return to the royal crematorium Friday to perform religious ceremonies and collect the remains of the late King following the emotional royal cremation ceremony Thursday.

The late King's relics and ashes will be carried in a ceremonial procession to the Grand Palace.

The royal relics will be placed at the Dusit Maha Prasat Throne Hall while the royal ashes will be transported to the Temple of Emerald Buddha and placed inside the Phra Si Rattana Chedi, a main pagoda in the temple. 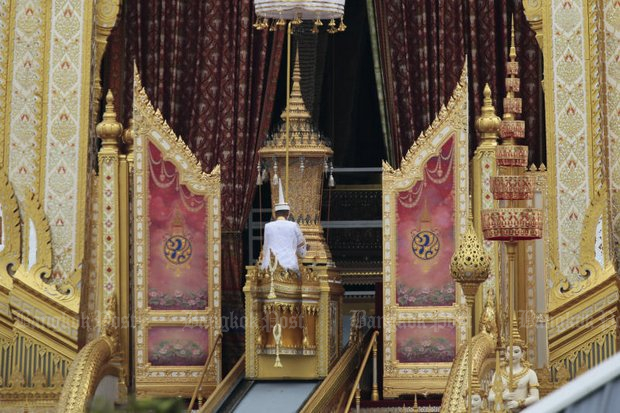 The royal urn symbolising the late King arrives and enters the royal crematorium.

On Sunday, the royal relics will be transferred to the Chakri Maha Prasat Throne Hall in the Grand Palace where they will be enshrined permanently.

HISTORY IN THE MAKING

In Thursday's historic event, the royal funeral urn of the late King Bhumibol Adulyadej was conveyed in grand and solemn processions from the Grand Palace to the royal crematorium site at Sanam Luang.

His Majesty the King presided over a merit-making ceremony for the royal funeral urn beforehand.

Millions thronged the site at and around Sanam Luang, and at replica crematoriums around Bangkok and in the provinces.

The King performed the ceremony at the Dusit Maha Prasat Throne Hall inside the Grand Palace where the royal urn lay in state before it was moved from its base and placed upon a three-poled golden palanquin.

The royal urn was moved out of the Grand Place into a royal procession — the first of six scheduled for the royal cremation ceremonies.

The white nine-tiered umbrella of state was then placed atop the royal urn.

His Majesty the King led the royal funeral corteges, accompanied by Her Royal Highness Princess Maha Chakri Sirindhorn and the royal family.

The first royal funeral procession with the royal golden urn borne atop the palanquin headed to Wat Phra Chetuphon, or Wat Pho, where the royal urn was transferred to the Phra Maha Phichai Rajarot, or the Great Victory Chariot, which was waiting in the second royal procession.

This was the main funeral procession with more than 2,400 officials wearing traditional ceremonial costumes and royal guards dressed in full military regalia.

Four court Brahmins also joined the procession. They released their hair which is normally tied in a knot on their heads to express their mourning.

The royal funeral urn was carried on the Great Victory Chariot in the solemn procession which moved slowly to the Phra Meru Mas at Sanam Luang. 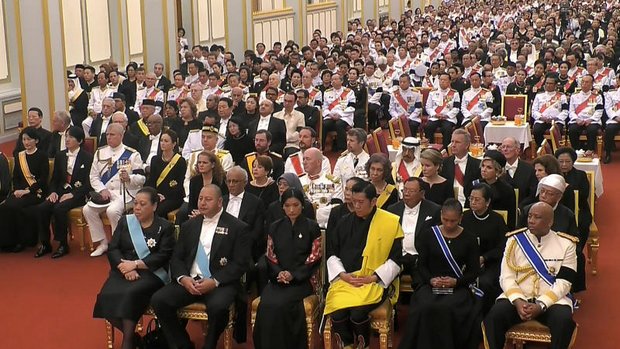 Marching music from a military band in the processions could not disguise the sound of single gun salutes which were fired every minute to honour the late King.

But the spectacular procession could not stem the flood of tears. Amid blazing heat, as the procession approached the ceremonial ground, mourners sobbed and wailed

"I love the late King so much. I am overwhelmed; I don't know how to put it into words," said Piyarporn Supaporn, 53, a housewife from Rayong.

"Our hearts and our minds are directed towards our beloved father," she added.

"This is a historic moment in my life. I never imagined I would be able to get this close to the crematorium. Now I am here," she said.

Wanpen Kayata, a 68-year-old retiree from Nonthaburi, said she arrived at the area on Tuesday and spent two nights waiting to pass the screening areas.

She entered the ceremonial grounds Thursday morning, as one of the last groups to enter.

"It saddens me whenever I have to talk about this, but it's a truly remarkable experience.

"It is so special to me, especially considering there are people who have been waiting since Oct 20 or Oct 21. The parades are definitely fitting to honour the late King."

She said she would stay until just after 10pm, when the royal cremation ceremony was set to conclude.

"I'm elated, " she said. "By getting to the ceremonial grounds, it's as if we are physically and mentally closer to him."

Volunteers in their blue caps handed out dok mai chan to mourners late Thursday at the Royal Plaza. (Bloomberg photo)

Traffic in the capital was smooth on many roads, except near venues set for people to lay funeral flowers where large numbers of black-clad mourners flocked to bid farewell to the late King.

Many people took on the job of volunteers, transporting mourners on their own motorcycles to the venues for laying flowers.

At Wat That Thong, mourners queued up in three lines with the tail of the queue in Soi Ekamai, about a kilometre from the temple.

The inner area for the mourners surrounding the royal cremation ground was adjusted many times to accommodate as many people as possible.

Officials closed the checkpoints from time to time, during the period when the royal ceremony was going on, or when the areas seemed to be full.

They were separated from the invited VIPs and distinguished guests, who were in the inner area, by fences.

About 200,000 others failed to enter the area as it was full, so they stayed in the vicinity.

On Wednesday, the first day people were allowed to enter areas around Sanam Luang through nine checkpoints, the atmosphere was hectic.

Similar scenes were seen again last night, when thousands of mourners who failed to enter the areas surrounding the royal crematorium ground tried to break through the checkpoints after they heard people would be allowed to lay flowers for the late King at the royal crematorium.

Authorities reportedly tried to allow another 8,000 to enter at night to witness Thai classical performances which were set to take place at Sanam Luang from 6pm until 6am this morning, pausing for ceremonies at the royal crematorium.

Elsewhere in the country, huge crowds of black-clad mourners headed out from dawn to pay their final tributes to the late King by laying funeral flowers at designated sites in every province.

In Nakhon Ratchasima, large numbers of people flocked to the Thao Suranari statue ground where a replica of the royal crematorium is situated.

Many had to wait for more than eight hours before reaching the place to lay funeral flowers.

In the northeastern province of Chaiyaphum, 10,000 mourners started queuing before 9am to lay flowers at the old city hall. The number of mourners kept swelling.

In Chon Buri, as large numbers of mourners turned up at the province's main public park for the royal funeral ceremony there, volunteers were seen assisting the elderly, pushing wheelchairs for the disabled and giving refreshments to visitors.

Weather was no deterrent to mourners who wanted to bid a final farewell to the late monarch.

At Nakhon Si Thammarat, they braved heavy downpours to place their flowers before a replica of the royal crematorium at Sanam Na Muang Public Park.

The ceremony was launched by Gen Yodsuek, commander-in-chief of the army.

In Dawei, oppposite Kanchaburi's Muang district, high-ranking officials of the Karen National Union (KNU) joined other Karen observed a moment of silence as they placed cremation flowers before a portrait of him.

Many Karen have sought shelter in Thailand in times of difficulty and prospered in the country, a debt many feel they owe to the late King's compassion and kindness.

In Surin's Kap Choeng district, which has a shared border with Cambodia, dozens of Cambodian vendors at the Chong Chom checkpoint joined over 30,000 Thais in laying cremation flowers to pay tribute to the late monarch.

Suthiroj Charoenthanasak, the district chief, said the Cambodian people and vendors took an active part in the cremation ceremony.

"They have a deep respect for King Bhumibol Adulyadej and they wanted to pay tribute."

These soldiers are from a Thai-Australian military drill in the northeastern province.

Meanwhile, a video clip of Prime Minister Prayut Chan-o-cha, whose face was a mask of tears as he participated in the royal funeral processions, went viral on social media.

In Ayutthaya, where almost 6,000 households in 11 tambons were submerged earlier due to heavy flooding, Bang Pa-in District Office was packed with over 50,000 residents who flocked to a sandalwood flower pavilion.

In Prachin Buri, more than 30,000 residents made their way to city hall to place cremation flowers for the late King at a replica royal crematorium at the civic space in front of the provincial hall. The mood was sombre but committed, observers say.

The event was being led by deputy provincial governor Tiwa Watcharakan.