Contraband brand-name glasses worth over 40 million baht have been seized in Bangkok and a Chinese national arrested, police said Tuesday.

China's Ling Zi Ju was detained on Monday on suspicion of harbouring the glasses, many of which are counterfeits, they added.

Authorities raided three warehouses he owns in the two districts of Klong San and Pomprap Sattruphai following a tip-off.

The raid was conducted by the Bureau of Intellectual Property Crime which operates under the umbrella of the Department of Special Investigation (DSI).

Search warrants were issued for the three warehouses after authorities were informed fake glasses were being smuggled and stored there, DSI director-general Paisit Wongmuang said at a press briefing Tuesday.

The briefing was also attended by bureau director Pinit Tungsakul and Mala Tangprasert, a representative of Luxottica Group SpA, an Italian firm that is the registered trademark owner of Ray-Ban.

The DSI said it is expediting efforts to suppress this and similar rackets as Thailand remains on the United States' Priority Watch List (PWL) for its abuse of intellectual property rights.

Ms Mala urged the DSI to widen the investigation to determine which smuggling routes were used. 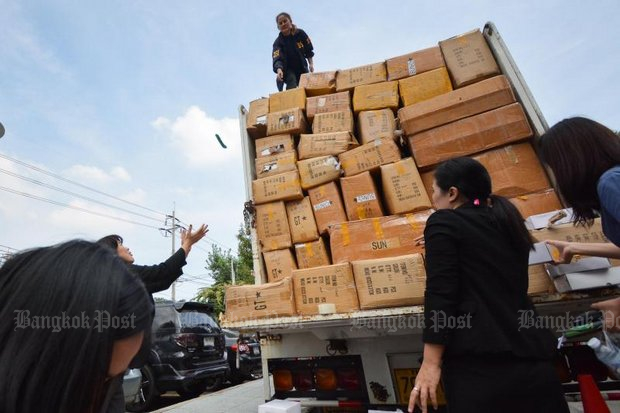 The raids filled a lorry with a haul of 210,000 pairs of sunglasses that would be worth more than 40 million baht if genuine. A Chinese national who is the owner of the warehouses was detained.

Luxottica Group SpA has also sent a letter to Kulit Sombatsiri, director-general of the Customs Department, calling on the agency to investigate the money trail involving the Chinese and other suspects, she said.

In another development, a smuggling case against Aree Sae-Tang, also known as Jae Kai, will be wrapped up and forwarded to prosecutors next month, officials said.

Ms Aree allegedly smuggled fake goods worth over 30 million baht into the country.

DSI deputy chief Suriya Singhakamol said her network was raided in February and the investigation showed the illegal goods were smuggled in from China.

Six suspects, including three juristic officers, have been charged with violating the Trademark Act and smuggling prohibited products into the country, officials said.

Those involved will be summoned for questioning next month, he said.