Holiday shoppers line up for their tax-break receipts during year-end shopping a year ago. (Bangkok Post file photo)

The shopping tax incentives, which allow each individual taxpayer to deduct the value of domestic purchases of goods and services worth up to 15,000 baht from personal income taxes, should be renewed to boost domestic consumption and reinforce economic growth, said Gen Prayut.

"The government has used the measure the past two years, and we still see it as essential to boost consumption. But this year's measure should be more concise and last for a longer period than last year," he said.

Last year a similar incentive was offered from Dec 14-31. In 2015 the scheme lasted only seven days.

Gen Prayut said the macroeconomic outlook is likely to fare quite well this year driven by strong exports and increasing public and private investment.

However, he said the government remains concerned about the agricultural sector as some crops, particularly rubber, still have falling prices.

"Dropping rubber prices are primarily because of market fundamentals. Many buying countries have reduced their purchases of natural rubber while global oil prices are still as low as US$50 per barrel," said Gen Prayut.

He said the government has been trying to increase domestic consumption for rubber, especially through campaigns calling for private tyre companies to raise their production.

Nathporn Chatusripitak, an adviser to PM's Office Minister Suvit Maesincee, said Gen Prayut also assigned the Industry Ministry at the meeting to maintain monitoring and support for the manufacturing sector.

The Industry Ministry reported the country's industrial output rose for a third straight month in September on an annual basis, helped by higher production of automobiles, rubber and electronics, showing the economy is growing steadily.

The manufacturing production index in September rose 4.21% from the same period last year. Capacity utilisation at factories in September was at 63.6% from August's revised 62.4%. Industrial goods accounted for 80% of total exports.

Nattakit Tangpoonsinthana, executive vice-president for marketing at Central Pattana Plc, the SET-listed retail and property developer under Central Group, said the festive mood has begun and consumer sentiment has improved. The government's shopping measure will have the biggest impact if announced by the end of this month to enable shoppers to make plans early, he said.

Phaibul Kanokvatanawan, chief executive at The Mall Group, said consumer spending power in October saw the highest decline in the past several years as people did not want to shop during the mourning period.

The shopping tax break at the end of this year will help stimulate consumption in the short term, he said.

To stimulate economic growth in the longer term, Mr Phaibul said the government should look into more import duty cuts to encourage spending by foreign tourists. This will benefit all business sectors. 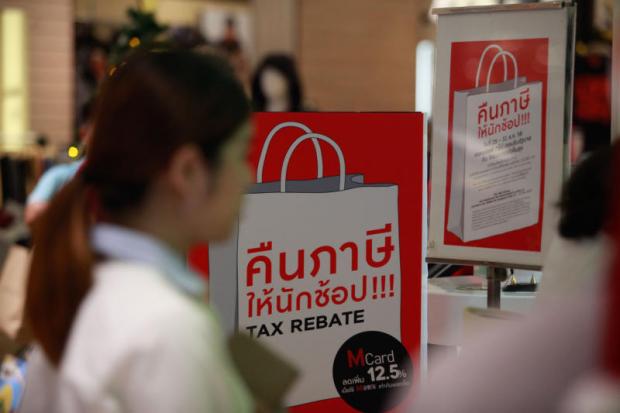 The government is likely to offer year-end tax breaks for shoppers again this year in order to stimulate consumption. (File photo by Jiraporn Kuhakan)

"The government should launch more long-term measures, particularly for the tourism business, which generates major income for the GDP," he said. "The government should also promote entertainment festivals or events nationwide during the remaining two months of the year to create a spending spree."