Two provincial governors are facing a formal investigation into their alleged mishandling of dok mai chan (sandalwood flower) laying rites during the late King's cremation ceremony on Oct 26, while three district office chiefs in Bangkok have been transferred to inactive posts for similar reasons.

Interior Minister Anupong Paojinda said Thursday that two committees were set up to look into alleged misconduct by the governors of Chon Buri and Nonthaburi, following complaints against them.

He said he wanted the probes completed within seven days.

"What I've learned from media reports is most of the complaints are about mourners being kept waiting in long queues," he said.

"This was blamed on poor management."

A source said the two governors will likely be transferred while the investigation takes place because a preliminary probe suggested the complaints lodged against them were credible.

Hundreds of residents converged on the provincial hall to protest against Chon Buri governor Phakrathorn Thianchai on Monday after the local dok mai chan-laying ceremony was reportedly mired in chaos.

A petition seeking the governor's ouster has also been launched on the change.org website by a user called "Woraphot T", who claims to be a Chon Buri resident.

The petition demands the governor take responsibility, and has so far received support from the electronic signatures of more than 5,800 people. 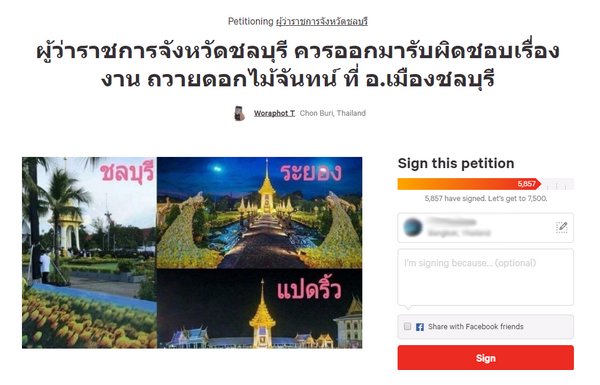 According to Woraphot T, mourners attending the flower-laying ceremony in Chon Buri had to wait for up to to 10 hours in a long queue under a blazing sun, while local government officials were sat in tents.

Meanwhile, a mourner who attended the flower-laying rites in Nonthaburi took to social media to say the governor, Phanu Yaemsri, was forced to leave early to the sound of jeers after he allegedly halted the ceremony despite there still being a long queue of mourners who had not yet paid their respects.

Woraphot T said he had been waiting in line two and a half hours when the flower-laying was halted so the governor could give a speech and introduce a performance.

He said the crowd then started booing before the governor fled the venue in a van.

According to the source, Bangkok governor Aswin Kwanmuang ordered the transfers after learning about the complaints.