SURAT THANI: A 300-million-baht pumping station has been completed to tackle flooding at Chaweng beach, a major tourism and economic zone on Koh Samui.

The Khlong Chaweng station in tambon Bo Phut can efficiently push 30,000 cubic metres of water per hour out to the sea, according to Somchai Metvattarakul, deputy director-general of the Department of Public Works and Town & Country Planning.

The result should be a sharp reduction in flooding at Chaweng beach, which is a major tourism and economic area of the island, he said while watching test runs of the system on Saturday

Station staff earlier tested the efficiency of the pumps during heavy rain on the island and they worked very well, pushing water out to sea, he said.

Two more pumping stations are being built at tambons Mae Nam and Mared on the island. Another station to be built in Bo Phud in 2019 is intended to solve flooding in the tambon itself, he added.

The department also plans to build pumping stations in three other communities as a long-term measure. 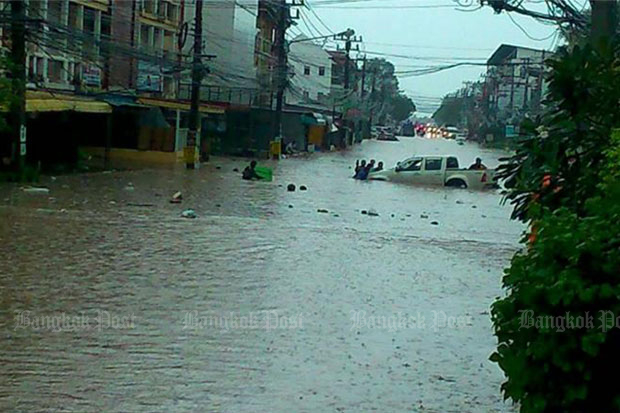 Authorities hope improved pumping facilities will reduce the possibility of scenes such as this one, taken during a flood in tambon Bo Phut on Koh Samui in December last year. (File photo by Supapong Chaolan)